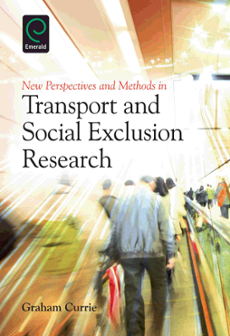 NEW PERSPECTIVES AND METHODS IN TRANSPORT AND SOCIAL EXCLUSION RESEARCH

NEW PERSPECTIVES AND METHODS IN TRANSPORT AND SOCIAL EXCLUSION RESEARCH

No part of this book may be reproduced, stored in a retrieval system, transmitted in any form or by any means electronic, mechanical, photocopying, recording or otherwise without either the prior written permission of the publisher or a licence permitting restricted copying issued in the UK by The Copyright Licensing Agency and in the USA by The Copyright Clearance Center. No responsibility is accepted for the accuracy of information contained in the text, illustrations or advertisements. The opinions expressed in these chapters are not necessarily those of the Editor or the publisher.

Graham Currie holds the chair of public transport at the Institute of Transport Studies (ITS), Monash University, Australia where he researches and provides training in public transport planning. He leads the Public Transport Research Group at ITS and has published over 100 conference papers and some 50 leading research journal papers in the fields associated with public transport. He specialises in developing sustainable transport strategies for local government. He is the chair of the research subcommittee of the US Transportation Research Board committee on Light Rail Transit and is a member of the Bus Transit and Transit Development and Planning committees at TRB. Professor Currie has led numerous research projects in public transport in all states and territories of Australia as well as internationally. He also specialises in research on transport for disadvantaged groups and published a book on transport disadvantage in Australia called No Way To Go — Transport and Social Disadvantage in Australian Communities in 2007. He has developed and directs the world first research clearinghouse in the field of social issues in transport (SORT) at www.sortclearinghous.info which is used by researchers from over 133 countries to access research in the field.

Alexa Delbosc has a BA from Lewis & Clark College, USA and an MA in social psychology from Harvard University, USA. She is a research fellow at the Institute of Transport Studies, Monash University. Alexa graduated with a research-based Master of Social Psychology from Harvard University. She has worked as a research analyst for Museum Victoria. She is presently a research fellow in the Institute of Transport Studies (Melbourne, Australia) researching the social implications of public transport and transport disadvantage. She is the research fellow working primarily on the collaborative Australian Research Council project ‘‘Investigating Transport Disadvantage, Social Exclusion and Well-being in Metropolitan, Regional and Rural Victoria’’ which is the subject of this book.

David A. Hensher is a professor of Management, and Founding Director of the Institute of Transport and Logistics Studies (ITLS) at the University of Sydney. He is one of the world’s leading research publishers particularly in the field of transport planning and has published over 425 research papers in the leading international transport journals and key journals in economics as well as 11 books. David is a fellow of the Academy of Social Sciences in Australia (FASSA), Recipient of the 2009 IATBR (International Association of Travel Behaviour Research) Lifetime Achievement Award, recipient of the 2006 Engineers Australia Transport Medal for lifelong contribution to transportation, recipient of the 2009 Bus NSW (Bus and Coach Association) Outstanding Contribution to Industry Award, member of Singapore Land Transport Authority International Advisory Panel (Chaired by Minister of Transport), past president of the International Association of Travel Behaviour Research and a vice-chair of the International Scientific Committee of the World Conference of Transport Research. David is the executive chair and co-founder of The International Conference in Competition and Ownership of Land Passenger Transport (the Thredbo Series), now in its 20th year. David is on the editorial boards of 10 of the leading transport journals and area editor of Transport Reviews.

Ray Kinnear is the deputy director of Public Transport at the Department of Transport in Victoria, responsible for Strategic Planning and Development. Ray holds an Engineering degree and a master degree in Transport Planning. He has more than 30 years experience in transport, including 10 years in senior management in the delivery of public transport services with the Public Transport Corporation and 15 years in planning and policy development in his current role.

Karen Lucas is a senior research fellow with the Transport Studies Unit at Oxford University Over the past 10 years, she has established an international reputation for her pioneering research looking at the role of transport in social exclusion and has published extensively on this topic. Her specialist research interest is in making evident the links between the social and environmental aspects of sustainable development, with a particular focus on meeting the needs of people living in deprived and excluded communities within developed societies. Karen has been a policy advisor on transport and social exclusion to national and local government in the United Kingdom and abroad and is associate editor for the Journal of Transport Geography and a member of its Editorial Board.

Julia Markovich is a postdoctoral fellow at the School of Urban and Regional Planning (SURP), Queen’s University, Canada. She recently completed her DPhil in Geography at the University of Oxford, where she examined the traditional urbanist movement in the United Kingdom. She is currently working on a book regarding the professionalisation of planning in Canada.

John K. Stanley is an economist and transport policy specialist, He is an adjunct professor and Bus Industry Confederation senior research fellow in Sustainable Land Transport at the Institute of Transport and Logistics Studies, University of Sydney. Before taking this role, he spent nine years as executive director of Bus Association Victoria, after eight years as deputy chair of Australia’s National Road Transport Commission. He is a board member of VicUrban, the Victorian Government’s development agency, and of Victoria’s Alpine Resorts Co-Ordinating Council. John has published extensively on transport economics and policy matters. He has been awarded an Australian Centenary Medal for services to public transport and conservation.

Dianne A. Vella-Brodrick is a registered psychologist and a member of the Australian Psychological Society (APS) and the APS College of Health Psychologists. She is currently a senior lecturer in Psychology at Monash University, Australia. Dr. Vella-Brodrick is a co-founder of the Emotion and Well-Being Research Unit, at the School of Psychology and Psychiatry at Monash University. She is an Editor in Chief of the Psychology of Well-Being: Theory, Research and Practice journal. She has co-directed the 1st and 2nd Australian Positive Psychology and Well-Being Conferences held in 2008 and 2010, respectively. She also founded the Positive Psychology Network in Melbourne, and is on the Executive Board (Secretary) of the International Positive Psychology Association (IPPA). Dr. Vella-Brodrick has developed the Mental, Physical and Spiritual Well-Being Scale and her current research projects focus on the development and evaluation of interventions aimed at enhancing well-being.