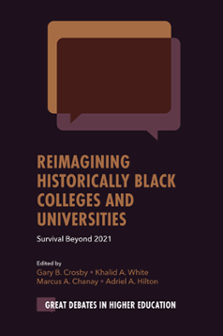 Gary B. Crosby served most recently as an American Council on Education Fellow at Rutgers University–Newark. In addition, he serves as the Vice President for Student Affairs at Alabama A&M University. He completed his PhD in Urban and Regional Planning and Master's in Political Science at Jackson State University. Dr Crosby earned a bachelor's degree in Criminal Justice from The University of Southern Mississippi.

Khalid A. White is a Professor of Ethnic Studies/African-American Studies at San Jose City College. Khalid is a proud historically black college and university (HBCU) graduate of Morehouse College, where he graduated with honors in Sociology. Subsequently, Dr White earned a Master's degree from Harvard University and a Doctorate degree from UC Davis and Sonoma State University. Both of his graduate degrees are in Education.

Marcus A. Chanay, a native of Pine Bluff, Arkansas is a HealthCare Professional, Higher Education Administrator, Professor, Researcher, Trainer and Fundraiser. Dr. Chanay is currently the Executive Vice President and Chief Operating Officer for B1 Venture and Holdings, Inc., a HealthCare Management Firm based in Pearl, Mississippi. He also serves as the Executive Director for the B1 Foundation, a 501(c) 3 non-profit organization. He previously served as the Vice President for Student Affairs, Enrollment Management and Executive Assistant to the President for Campus Operations at Lincoln University of Missouri. He holds a Ph.D. in Urban Higher Education from Jackson State University, a M.S. in Educational Administration and Supervision from Jackson State University and a B.A. in Mass Communications from the University of Arkansas at Pine Bluff.

Dr. Chanay has done further study at Indiana University/Purdue University Indianapolis (IUPUI) in the Lilly Family School of Philanthropy where he holds a Certificate as a Certified Fundraising Manager (CFRM) and Harvard University Graduate School of Education, where he received a certificate from the Institute for Educational Management (IEM).

Dr. Chanay is an accomplished author, where he has published a number of articles and manuscripts. His research concentration has been in the areas of recruiting, retention and the involvement of African American Males in Post-Secondary institutions, enhancing academics and services through student attrition, and the relevance of Historically Black Colleges and Universities.

He is a member of several local and international professional and social organizations, where he is a Board member and Past President of the National Association of Student Affairs Professionals and is a current Board member for Phi Beta Sigma Fraternity, Inc., where he serves as the International Director of Education.

He stands on his personal philosophy of “Tomorrow’s Success is founded on Today’s Preparation.”

Dr. Adriel A. Hilton is vice chancellor for student affairs and enrollment management at Southern University at New Orleans. He previously served as dean of students and diversity officer at Seton Hill University in Greensburg, Pennsylvania, where he provided strategic leadership and direction to the offices of Housing and Residential Life, Community Standards, First Year & Transition Programs, Diversity & Inclusion, and International Student Services.

Subsequent positions include the director of the Webster University Myrtle Beach Metropolitan Extended Campus; chief of staff and executive assistant to the president at Grambling State University; assistant professor and director of the Higher Education Student Affairs program at Western Carolina University; and inaugural assistant vice president for inclusion initiatives at Grand Valley State University. He honed his expertise in higher education administration and teaching at Upper Iowa University (UIU) as executive assistant to the president and assistant secretary to the board of trustees, and adjunct faculty member at both UIU and the University of Northern Iowa. Hilton was appointed UIU’s very first chief diversity officer.

Hilton is also an avid scholar. As a Frederick Douglass Teaching Scholar at Clarion University of Pennsylvania, he taught and developed academic programs within the Office of the Provost. Previously, he served as the first public policy fellow at the Greater Baltimore Committee, a leading regional organization comprised of civic and business leaders in Baltimore, Maryland. While there, Hilton worked closely with advisors to research, develop, and advocate a public policy agenda to advance the organization’s work in various areas, including access to health care.

Prelims
Chapter 1 An Anchored Look Forward
Chapter 2 The History of HBCUs: Lessons on Innovation from the Past
Chapter 3 Don't Believe the Hype: HBCUs and MSIs Are Still Necessary to Black Political and Socioeconomic Development and Advancement
Chapter 4 HBCUs in a New Decade: A Look at 2010 to 2020 and Beyond
Chapter 5 HBCUs: The Foundation and Future of Social Justice, Leadership, and Leadership Development
Chapter 6 Using THRIVE as a Framework for Creating HBCU Success Stories
Chapter 7 Philanthropy versus Fundraising – An Imperative for HBCUs
Chapter 8 Financial Issues for HBCUs in 2020 and Beyond
Chapter 9 Sharpening a Competitive Edge: How HBCUs Leverage Their Strengths with Strategic Partnerships
Chapter 10 Adaptive Survival Strategies: A Case Study Analysis of Four Historically Black Colleges and Universities
Chapter 11 Answering the Call: The Role of HBCUs in Engaging Black Women's Identity Politics
Chapter 12 Current Trends, Future Directions: Promoting the Long-Term Survival and Success of HBCUs
Chapter 13 Democracy Matters in the 21st Century HBCU Writing Classroom: AfriWomanism as a Political, Pedagogical Tool
Chapter 14 The Category Is…Transformational Inclusion: A Conceptual Framework for (Re)imagining the Inclusion of Black Queer and Trans* Students Attending HBCUs
Chapter 15 The Usage of Personal Power When Collaborating with Black Male Scholars at a Historically Black College and University
Chapter 16 The Reasons for Reimagining
Epilogue
About the Editors
About the Contributors
Index