The beagle has landed

The beagle has landed

Maxon is involved in many different aspects of the Mars project. The solar array deployment (the solar "wings" that help control the craft) and the robotic arm, which supports the panoramic cameras and other instruments, are all powered by maxon motors (see Plate 8).

Most importantly, maxon motor has been chosen to drive the tunneling "mole" that will be a vital part of the mission. It is this that will collect soil and rock samples from below the surface of the Red Planet and that will hopefully provide the answer to one of mankind's great unanswered questions: "Is there, or has there been, life on a planet other than our own?" 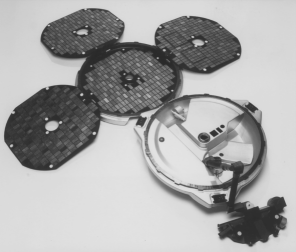 Motors supplied by maxon motor must be able to withstand extreme conditions. They must be able to function in temperatures of up to –100°C on the planet's surface, yet will have to be sterilized before departure at temperatures well above boiling point. They have been designed using some extraordinary state-of the-art technology, including special lubrication, a new form of low discharge capacitor, vacuum-compatible bearings, special designed low degassing cable and extra reinforced gearboxes.

With a landed mass of less than 30kg, Beagle 2 represents the most ambitious science payload to systems mass ratio ever attempted. Almost a third of the payload will carry out various types of analysis or be used to manipulate and collect samples for study on the surface of Mars. This is one of the reasons for the team choosing maxon who make some of the world's most miniscule precision motors; the smallest one weighs a mere 2.8g, is only 6mm in diameter, and yet it turns at up to 100,000 revolutions per minute.

It is no wonder that Lord Sainsbury, the Minister for Science, recently said:

Beagle 2 is a superb demonstration of the skilland creativity of British science and engineering.

The Beagle 2 mission will land on Mars ahead of the next NASA Lander, and maxon will be there – at the sharp end.