A visit to Bucharest to give an invited talk on Microelectronics Education led to an unexpected encounter with a PARROT and an exciting hidden talent. At SIITME (Symposium Internationale for Informatics and Technology in Electronics) was a small exhibition, and one exhibit was of the PARROT Clip (Figure 1), invented, developed and marketed by Radu Filipescu (Plate 1). The PARROT Clip is a simple and effective measurement clip having a positive beak-like grip capable of firm connection to fine leads and terminations. The PARROT comprises a fine metal hook sprung into a fine tipped metal barrel and permits fine wires to be clamped by the hook against the barrel or for the barrel itself to be used as a fine tipped probe with a low contact resistance less than 100 milli-ohms. The external flying lead is soldered directly to the barrel. The barrel and flying leads are insulated to 1000V. I was impressed. This form of clip is valuable for those routinely in electronics rework and testing. It is easy to use, is suited to modern electronics assemblies and must be destined to be the best alternative to crocodile and other forms of flying lead test clips, for use with multi-meters and similar test equipment. The inventor, Radu Filipescu was awarded the Gold Medal at the EUREKA World fair of Inventions in Brussels in 1991, since which the invention has remained out of sight of the major market opportunities in the West, as Romania endeavours to merge into the developed enterprise world. 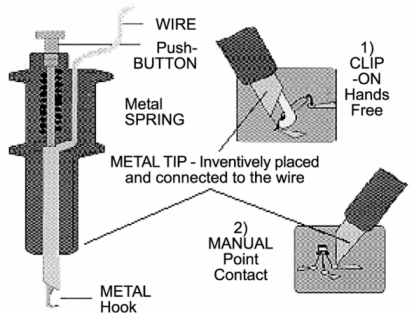 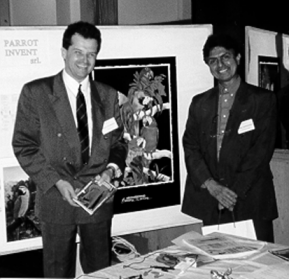 Radu Filipescu has another even more exciting side to his character. He was one of those heroes we admire from afar when we read of courageous acts against oppressive regimes. In his younger days he was inspired to protest against the Ceaucescu regime by distributing leaflets which themselves were inventively printed. Radu had created a print master using dymo® type tape which he inked and then pressed onto each sheet of paper. The leaflets sought the removal of Nicolae Ceaucescu by a democratic referendum. When police arrested him, Radu Filipescu was distributing the leaflets to houses in Bucharest. Police discovered his "printing equipment" and 2,000 more leaflets in his home. He was jailed by military trial for ten years during which he was subjected to torture and beatings. He was released after three years following campaigns by Free Europe and others. Later his father, an eminent medical professor, was forced to resign his job. It is a privilege to meet a man of the character, conviction and guts of Radu Filipescu who is not only a clever engineer, but also one of life's hidden heroes.