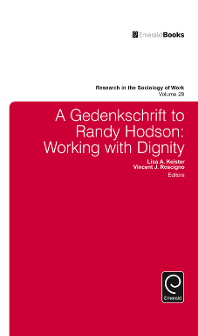 The purpose of this volume is to pay tribute to the intellectual ideas and scholarly contributions of Randy Hodson. Randy grew up in Wyoming and graduated from the University of Wyoming in 1975; he received his MS in 1977 and his PhD in 1980 – both in Sociology – from the University of Wisconsin. Randy was promoted through the ranks of assistant, associate, and full professor during his years on the faculties of the University of Texas at Austin (1980–1985) and Indiana University at Bloomington (1986–1996). He joined the faculty of the Ohio State University in 1996 where he was a Distinguished Professor of Social and Behavioral Sciences. Randy was the author of 9 books and more than 100 articles, book chapters, and other research papers; and he received countless grants and awards for his research, teaching, and service. Among these were awards for outstanding scholarship from sections of the American Sociological Association, membership in the American Association for the Advancement of Science, and distinguished scholar and distinguished teaching awards from Ohio State University. Randy also provided critical service to his universities and to the American Sociological Association including serving as editor (with Vinnie Roscigno) of the American Sociological Review (2007–2009), the association’s flagship journal. Randy passed away in Columbus, Ohio on February 26, 2015 following a long fight against cancer.

As impressive as they are, a list of honors, publications, and positions does not capture the true breadth and significance of Randy’s intellectual influence. He published central papers on a large range of topics in several sociological subfields, including work and occupations, organizations, social stratification and inequality, economic sociology, and research methods. One of his great intellectual passions was understanding the quality and meaning of work life, and his influential book Dignity at Work (Cambridge 2001) summarizes much of his thinking in the area. In addition to his own research on the topic, Randy’s ideas generated considerable other research, as the contributions that comprise this volume demonstrate; each chapter builds in some way on Randy’s ideas and work, and the range of topics in this volume underscore how diverse his reach has been. Randy also enabled other researchers’ work by developing an extensive pool of organizational ethnographies that he made available as a data source. The narrative accounts in those ethnographies spanned the second half of the twenty-first century and the beginning of the twenty-second century and supported both quantitative analyses through content coding and theoretical work on topics ranging from workplace bullying and sexual harassment to the growth of corporate malfeasance, pilferage and the resulting stagnation of the American economy. Even during his illness, Randy continued to make important intellectual contributions: his most recent work explored organizational chaos and informal workplace relations, including peer support, informal training, solidarity, and bullying and harassment; and he was actively publishing influential papers on student debt and its consequences.

I first knew Randy intellectually through his research on work and occupations. By the time I became a sociologist, it was impossible to study work and organizations without understanding Randy’s research. In addition to books that were aimed at academic audiences, Randy was co-author (with Teresa A. Sullivan) of the textbook The Social Organization of Work, now in its 5th edition, that nearly all sociologists encounter during their careers. When I joined the faculty of Ohio State in 1999, Randy and I quickly discovered our common intellectual interests. We – along with our spouses – also became quick friends, and our shared interests in the outdoors, particularly in the western part of the United States, fueled our close ties for many years. Intellectually, Randy and I found common ground in our interest in the changing nature of work and organizations during China’s economic transition. I remember our long conversations about the dynamics of ownership and the meaning of those changes for Chinese workers and the quality of work in state owned firms. We did not always agree! However, Randy helped me see my own work in China in a way that deepened our collaborative work and that still influences the way I view workplaces and the study work and related issues. As a result, Randy’s ideas and thinking permeate my work invisibly but clearly. I know that many of Randy’s other collaborators have had similar experiences, suggesting again that his ideas are even more pervasive than even the published work that builds on it suggests. When I was about to leave Ohio State, Randy asked me to serve as the next editor of Research in the Sociology of Work (RSW), the series that he edited from 1996 to 2006 and in which this volume is appearing. I knew this was an honor because Randy cherished the series. It is fitting that this is my last volume as editor, and that Steve Vallas – another colleague of Randy’s and a contributor to this volume – will serve as the next RSW editor.

We hope that this volume will honor Randy’s many contributions and encourage readers to look further into his work. We also hope that the volume will provide a lasting record and reminder of the significance of Randy’s work for academics as well as for his friends and family, particularly his wife, Susan, and their daughters, Debbie and Susie. We are grateful to all those who agreed to contribute to this volume; and we want to thank Cristina Irving Turner, Publisher at Emerald Publications, for her assistance with all aspects of this volume. It important to note that many others wanted to contribute to this collection but were unable to participate because of prior commitments; indeed, if all those who wanted to add a piece of research had been able, the collection would have filled several volumes. Finally, if we failed to include anyone who wanted to contribute to this remembrance, we regret the oversight. We never issued a call for papers for this volume because we compiled it at an emotionally-challenging time. We hope that all of Randy’s friends and colleagues, including those who are not represented here, will know that he was aware that we were creating this memory and was grateful for the overwhelming support that we received.