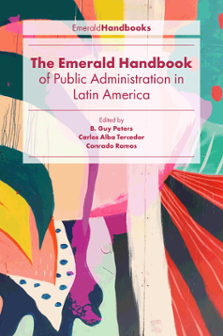 The Emerald Handbook of Public Administration in Latin America

The Emerald Handbook of Public Administration in Latin America

B. Guy Peters is Maurice Falk Professor of Government at the University of Pittsburgh, and former president of the International Public Policy Association. He is currently Honorary Editor of the Journal of Comparative Policy Analysis and editor of the International Review of Public Policy. His most recent publications are Administrative Traditions (Oxford University Press) and Governance, Politics and the State, second ed. (Macmillan, with Jon Pierre).

Conrado Ramos is full Professor of Government and Public Administration at the Department of Political Science of the Faculty of Social Sciences, Universidad de la República. He has published extensively about public administration reforms in Latin America, with focus on civil service systems, models of public management, and the politics of patronage. Among his latest publications are Ramos Larraburu, C. (2019); The Politics of bureaucracy: A view from the South. British Journal of Politics and International Relations; Panizza, F., Peters, B. G., and Ramos Larraburu, C. R. (2019). Roles, trust, and skills: A typology of patronage appointments. Public Administration, 97(1), 147–161; Ramos Larraburu, C., Milanesi, A., and Casa, M. (2019). Desafíos de la construcción de servicios civiles en Brasil y Uruguay. Revista do Serviço Público, 70(1), 157–187;

This Handbook is the culmination of many – too many – years of work attempting to bring together a collection of studies of public administration in Latin America. The project began approximately a decade ago and was motivated by the belief that there was inadequate knowledge about public administration in Latin America. There was a great deal of legalistic discussion on the ways administration should function, but much less about how public administration in these countries functioned in practice. A number of scholars had been publishing interesting material, but these needed to be brought together and made more accessible to a wider public, especially for an English-speaking readership. The project was started by Carlos Alba and Guy Peters; when additional energy was needed to complete the project, Conrado Ramos joined the editorial team.

The concept behind this Handbook was to have some chapters that covered the administrative systems of individual countries, as well as some that covered important topics in public administration across the region. We could not cover all Latin American countries with individual chapters, so attempted to include chapters that provided information about the largest systems, as well as those with distinctive features. Those choices were, of course, also constrained by the availability of authors interested in participating in the project. Likewise, the comparative chapters were intended to cover several important aspects of public administration in these countries; however, there is a big emphasis on issues of accountability, reflecting the history of corruption and clientelism in Latin American administrations.

In addition to those of us with chapters included in this volume, several other people and organizations have helped make this project a reality. We received funding from the Ministry of Public Administration in Spain for an initial conference. The United Nations Development Fund supplied additional resources for cooperation among authors. In addition, the Latin American Studies Center at the University of Pittsburgh provided additional resources.

This book has benefited greatly from the excellent editing and management by Morgan Fairless at the London School of Economics. We would also like to acknowledge the patience and professionalism displayed by Hazel Goodes and her colleagues at Emerald Publishing. They have endured endless delays in the completion of the manuscript with grace and have continued to support the project regardless. They, like us, are thankful that the project is now complete. We hope the readers of this Handbook are equally as happy.