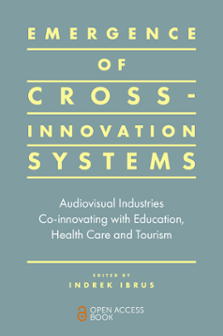 This chapter addresses the forms of co-innovation between the audiovisual (AV) industries and the health care sector. It gives a brief overview of how media have been used in health promotion, medical training and treatment by drawing on selected examples from television, entertainment and video game industries. Informed by an array of case-studies, this literature review suggests that the emergence of the new digital audiovisual media and online technologies bears a great potential to improve health care services in multiple ways, while it also recognises the risks associated with the crumbling of medical authority in thoroughly mediatised worlds. Therefore, it maintains that a successful adoption of entertainment-oriented media formats in health care always requires a close relationship with professional medical expertise.

This chapter is published under the Creative Commons Attribution (CC BY 4.0) licence. Anyone may reproduce, distribute, translate and create derivative works of this chapter (for both commercial and non-commercial purposes), subject to full attribution to the original publication and authors. The full terms of this licence may be seen at http://creativecommons.org/licences/by/4.0/legalcode

The media are key agents in articulating and disseminating information on health and shaping the audience’s health behaviour. Television, for example, has long been viewed as a tool for health education (Long, 1978). Health themes have been prevalent in television and radio programs for decades; at the beginning, this was in the openly promotional, mainly informational and educational form, and directly associated with national health care policies. This approach can be illustrated by many examples. The Finnish series Keys to Health, in which volunteers were documented and televised during their attempts to change their unhealthful habits, such as quitting smoking (Puska et al., 1987); BBC’s television series You in Mind, which addressed mental-health problems (Barker, Pistrang, Shapiro, Davies, & Shaw, 1993); or televised public-service announcements to help children suffering from diarrhoea in Egypt (Elkamel, 1995).

Alternatively, health promotion can merge with the fictional narratives of various films and serials. Over time, films and television shows have effectively made use of medical experts contributing to the storyline to propagate healthy lifestyles among audiences. Vicki Beck (2004) has highlighted the cooperation between Centers for Disease Control and Prevention (United States) and the hit drama The Bold and The Beautiful or MTV’s special HIV programme for the youth audience among many other examples. Similarly, Elkamel (1995) has exemplified the case of an Egyptian soap opera, The Family House, which is specifically designed to address an array of interrelated health issues.

These cases effectively combine various bodies of knowledge and skills for the common social good by bringing actors together from public health organisations to major creative hubs, such as Hollywood. One of the strengths of this type of cooperation is that it serves two functions at the same time: educating and entertaining. On the one hand, it has been shown that planned cooperation between health care and mass media, such as television, can have a significant impact on the audiences by raising their awareness of any particular health issue, leading a change in unhealthy behaviours and even saving lives. On the other hand, in the academic analysis of more recent forms of entertainment, such as audience-oriented reality shows, research focus has shifted to the theoretical framework of mediatisation, to reveal the shortcomings of health communication presented in contemporary audiovisual (AV) formats.

Christensen (2016), for example, has applied this framework to examine the transformations of health expertise in public-service television programmes in Denmark. Health, from this perspective, can be viewed as a central aspect of modern lifestyle, where it ‘is regarded as a project for which people individually account’ (2016, p. 205). Along this line, health issues are increasingly conveyed as matters of the individual, rather than as a collective responsibility. Further, health becomes the fabric combining various other aspects of everyday life under the conditions of ‘lifestyle programming’ (2016, p. 205) – for instance, reality shows about developing healthy eating habits or losing weight. Christensen noted that this tendency, influenced by British TV, started taking shape in Danish public-service health communication from around 2000.

As an example, she describes the transformation of a series, The Doctor´s Desk, which provided scientifically grounded information on health and diseases, into a youth-oriented entertainment show, Take Care of Yourself!, which motivates ‘viewers in good health to live healthier, stay in shape, and feel better’ (2016, p. 211). Within the framework of mediatisation, this process can be understood as submitting to media logic by reframing health as lifestyle and by creating ‘their own experts, who are produced and tailored to the needs of TV and the demand for dramatically successful content’ (2016, p. 214) – an outcome of coping with market competition in TV programming. Christensen (2016, p. 215) suggested that this tendency opened up a potentially endless number of various health topics for entertaining TV production.

Consequently, the questions of reliability, authority, and ethics of health promotion arise. The emergence of new media technologies has further fed into these anxieties. In practical terms, of course, digitalisation of health care has improved the doctors’ work and their patients’ experiences in numerous ways. Personal digital records have allowed easy transmission of information between medical specialists, clinical procedures have become much quicker, telemedicine delivers health care across distance (Matusitz & Breen, 2007), such smart technologies as iPads or smartphones have strengthened the relationship between the doctors and their patients and raised consciousness of one’s medical situation by allowing them to keep track of it. Likewise, social-media technologies provide an effective platform to discuss and disseminate information on health care, as well as providing a dangerous arena for inaccurate or confidential health information, which brings forth the questions of privacy. It has been found by the Pew Research Center that 72% out of the adult Internet users in the United States have looked online for health information in the past year (Fox & Duggan, 2013). In addition, it has been estimated that 4.5% of all searches on the Internet worldwide are health related (Eysenbach & Kohler, 2003). In this light, the complex dynamics of the online world as a primary source for health education and information needs further attention, especially because the efficacy of social-media-marketing techniques in health promotion has lacked empirical evidence (Kontos, Emmons, Puleo, & Viswanath, 2010, p. 217).

It has been noted that media interventions in health education work better when a multimedia approach is applied (Barker et al., 1993, p. 282). Along with the increasing complexity of emerging media forms, studies have refocused their attention from studying the mass-media effect to examining the interaction of the audience with specific media. These perspectives lead us to explore the use of more participatory, information and communication technology-based digital media in health and physical education, especially the application of video games. While traditionally this domain has been associated with numerous risks for mental and physical health, especially considering media’s role in intensifying these assumptions, over the recent decade researchers have started to emphasise its positive effects and confront the belief that video gaming is an exclusively sedentary or introvert activity.

For example, the exergames, which engage players in physical activity through innovative interfaces, such as ‘electronic dance pads, motion platforms, bicycle ergometers, haptic devices and motion-tracking cameras’, are used to enhance the degree of interactivity (Papastergiou, 2009, p. 604). The most famous one being a dance-simulation game, Dance Dance Revolution. Also, mobile phone applications and games can be seen as promising tools to increase physical activity and encourage healthy eating or other positive health behaviour – especially when virtual avatars, social media and gaming elements are combined in their development (Hswen, Murti, Vormawor, Bhattacharjee, & Naslund, 2013), and considering their potentially wide reach among populations at relatively low costs (Broom & Flint, 2018). One of the most notable commercial examples in that respect is the augmented-reality game Pokèmon Go.

Another field of innovative use of games is their application in surgical training. For example, some studies have shown that experience with certain video games may contribute to the professional skills of a physician in endoscopic simulator performances (Harper et al., 2007, p. 1207; Kato, 2010, p. 118). However, the full potential of tailor-made game solutions for improving surgical skills is still to be discovered as there has not been enough research carried out on this topic.

Relatedly, by combining the online infrastructure and the potential of gaming-oriented rehabilitation and disease management, companies have emerged that offer integrated platforms of various services for both medical staff and patients. One of the examples of this is an e-health company called Cognuse, in Estonia; it operates in the areas of neurological diseases and speech therapy. Another is a Danish digital health-communication platform, Visikon, which helps patients to overcome their concerns regarding their treatment through animated AV narratives. Both these cases are included in the analysis in Chapter 9.

In addition, interesting results have sprung from the innovative cooperation of health and AV initiatives in the sphere of virtual reality (VR). During the last 20 years, VR has been widely applied in the treatment of mental-health problems (Riva, Wiederhold, & Gaggioli, 2017, p. 5), and the use of this technology has found support when dealing with anxiety disorders, stress-related disorders, obesity and eating disorders and pain management (Riva, Baños, Botella, Mantovani, & Gaggioli, 2016). These forms of treatment often require a significant amount of creative AV content and can, therefore, be considered as a form of artistic practice.

Sheldon Brown, for example, created the VR solution Smoke and Mirrors, which enables multiple participants to 3D scan their faces, inhabit a personalised avatar and enter into a shared immersive environment, filled with a series of mazes, through computer screens and a user–interface station, consisting of a joystick, trackball and button. The purpose of this was to enforce engagement in activities regarding the social and cultural history of the tobacco industry and consumption and ultimately, through an aesthetic experience, have a positive effect on the user’s harmful health behaviour – smoking. As the author said, it is ‘about the translation of media spectacle into physical reality and social effect’, while both ‘form and content deliver this message together’ (Brown, 2003, p. 39).

This chapter focused on the various forms of co-innovation between the AV industries and the health care sector. As discussed earlier, some of the practices of treatment, recovery, training and promotion in health care have benefited from the innovative use of AV media technology. However, in health communication specifically, adopting forms of representation which were originally produced for the purpose of entertainment, such as video games or reality shows, can be subject to commercial-market competition, propagating conflicting values, losing sight of educational motives and leading to dubious effects regarding health issues. In the circumstances of inevitably mediatised worlds, the sure way to avoid these risks seems to be in maintaining tight connections with medical professionals and scientific research.

Eysenbach & Kohler (2003) Eysenbach, G. , & Kohler, C. (2003). What is the prevalence of health-related searches on the world wide web? Qualitative and quantitative analysis of search engine queries on the Internet. AMIA annual symposium proceedings, 2003, 225–229.