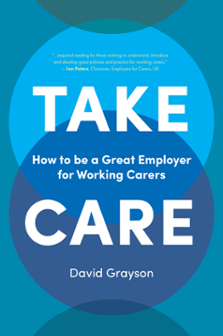 Employers for Carers (2011a) Employers for Carers . (2011a). Carers and employment: Making a difference, realising potential. Carers UK, Employers for Carers and ADASS (Association of Directors of Social Services), July. (With staff retention and resilience a key challenge for employers large and small, this practical guide shows how local authorities, employers and other local stakeholders can have a real impact on helping to retain and recruit carers into the workforce. The guide (full and summary versions available) includes key recommendations, key drivers, including the business benefits of supporting carers, key tips and practice examples.)

Employers for Carers (2011b) Employers for Carers . (2011b). Caring at a distance: Bridging the gap. Carers UK, Employers for Carers and Nomura, June. (This research examines the impacts on employers and employees of managing caring at a distance. With our ageing population and workforce – and increasing mobility through employment – managing caring at a distance is moving centre stage as a business issue. The research is based on a survey of around 1000 employees who have caring responsibilities at a distance, along with 50 major employers. The pressure on the “sandwich generation” emerges loud and clear – people, often women, who are combining care for an older relative with a range of other responsibilities including looking after their own children. Most respondents (60%) were in this age group – age 40 to 54 and reported the cumulative pressures of caring, not just the physical component but the mental aspect associated with stress, anxiety and tiredness.)

Employers for Carers (2012) Employers for Carers . (2012). Sandwich caring. (Today more and more parents are combining looking after young children with caring for older or disabled loved ones. This is sometimes called ‘sandwich caring’ or ‘dual caring’ and those who fall under this category are usually referred to as ‘the sandwich generation’. But this dual role can sometimes come at a cost and carers may suffer from ill health, face difficulties to access or stay in the labour market or experience financial hardship. This Carers UK/Employers for Carers report looks at a specific category of sandwich carers, namely those ‘who combine looking after a dependent child under the age of 18 with caring for an adult’. Despite rising awareness of this ‘sandwich generation’ it is difficult to get a clear understanding of the extent of the caring roles of the sandwich generation. Carers UK and Employers for Carers conducted this research as an attempt to better understand the extra pressure these dual caring responsibilities have on modern families and their implications for policy, public services, employers and the labour market.)

Employers for Carers (2013) Employers for Carers . (2013). Supporting working carers: The benefits families, business and the economy. (The Employers for Carers, Carers UK and HM Government Task and Finish Group was set up in 2012 to explore ways in which carers – people looking after a family member or friend who is sick, ill or disabled – can be supported to combine work and care. The final report Supporting Working Carers sets out the findings and recommendations for Government and employers. The Task and Finish Group’s work also included an Employer Business Benefits Survey in which over 220 employers participated.)

Employers for Carers (2014) Employers for Carers . (2014). Supporting employees who are caring for someone with dementia. (With our ageing population and workforce, dementia is becoming an increasingly significant issue in the workplace, with more and more people combining work with caring for a loved one. In recognition of this, an employer and employee survey was conducted between October 2013 and January 2014 to discover the impact of working while also caring for someone with dementia. This report sets out the key findings and emerging issues from these surveys. It concludes by making 10 recommendations for employers, health and social care services and government to take to facilitate better support for employees who are caring for loved ones with dementia.)

Employers for Carers (2015) Employers for Carers . (2015). Caring and isolation in the workplace: Impact report and recommendations. (With increased longevity and later retirement ages an increasing number of people in the UK are combining work and caring for older, ill or disabled relatives and friends. However, while one in nine people in any workplace will be supporting a loved one in this way, caring still remains a relatively hidden issue in the workplace, with many carers feeling lonely or isolated even when they may be part of a busy team or family unit. This survey of working carers highlights the isolation felt by thousands of carers in the workplace, with 38% indicating that they were not comfortable talking about their caring responsibilities at work. One in six working carers (16%) said that they felt isolated because they felt like they were the only person in this situation and over four in ten (43%) reported that their colleagues and managers did not understand the impact of these caring responsibilities. The research sets out how working carers can best be supported to minimise such isolation including through early advice, information and support and recommends practical ways in which employers and other parties can help.)