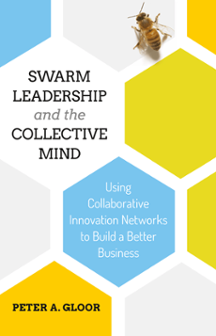 SWARM LEADERSHIP AND THE COLLECTIVE MIND

SWARM LEADERSHIP AND THE COLLECTIVE MIND

First of all I would like to thank my children Sarah and David for many long discussions deep into the night, critically tearing apart and reassembling my ideas. My friend and colleague Hauke Fuehres has also been a constant critic and contributor of crucial ideas all along the way. In particular Hauke came up with the term “homo collaborensis.”

The members of my own COINs have been role models and inspiration for how to build the creative swarm. I am deeply indebted to Ken Riopelle and Julia Gluesing for reading early drafts and giving excellent feedback. Gianni Giacomelli, Vinit Verma, and George Dellal are all former industrial research sponsors who joined the COIN and commented on early versions of the manuscript. Andrea Fronzetti Colladon and Francesca Grippa are long-time academic collaborators, we have been jointly developing many of the ideas described in this book. Collaboration with Casper Lassenius, Maria Paasivaara, Cristobal Garcia, Christine Z. Miller, Takashi Iba, and Keiichi Nemoto goes back decades, they have been core members of our COIN significantly contributing to the concepts described here. Peter Margolis, Michael Seid, and George Dellal have been fearless leaders and role models of the C3N “poster” COIN described in this book, which greatly shaped my understanding of the inner workings of COINs.

Finally I am deeply indebted to Thomas W. Malone, Rob Laubacher, Alex (Sandy) Pentland, and Thomas J. Allen for being inspiring mentors and friends at MIT for the last 14 years.