The how, the what and the where of circuit boards.

A bright February day saw a select band attend yet another SMART Group Workshop, this time held at the excellent premises of CEMCO at Waterlooville in Hampshire.

The welcome came from Bob Willis, SMART Group Technical Director, who brought the thirty or so delegates up to the mark with developments at the Group. These include their new Newsletter, their interactive CD-ROMs, and their planned "Lead- free- Hands On Experience" which is being run during NEPCON in Brighton on 26 and 27 May.

It was the turn of the peerless Pete Starkey to talk to those present about the how. The PCB manufacturing process may well-established technology, but his detailed insight into the complexity of the manufacturing process gave a experienced view of what needs to be considered when sourcing such commodities. Pete talked the meeting through the steps on how boards are made, starting from the basic building block of copper clad laminate.

Designs, he said, now come down modem lines, so distance between buyer and supplier is of no consequence. He went through the stages of how a six-layer circuit board was produced, imaging, lay-up, pressing and materials used, core thickness, the dielectric spacing between builds. Good material utilisation, he stressed, is important. Making multilayer boards is all about keeping layers in registration; changes in temperature and humidity can play havoc with film stability for registration.

The path proceeded, pumice brushing cleans copper wonderfully, essential for good photoresist lamination. The DES process was covered, as well as an explanation of post-etch tooling. Then it was on to AOI, X-ray inspection of drilled holes, then cleaning and deburring, and in some detail the complete process through to electrical test and final inspection.

This was a presentation that could only be given by someone who has been making circuit boards with longer care than he would like to remember, and longer than most people would care to.

Dennis Price of Merlin Circuit Technology is another industry veteran with over 30 years experience, he talked about the capabilities and design for manufacture from the manufacturers viewpoint, and obviously from great experience and knowledge.

Happily, he reported, the last 5 months have been really busy at Merlin, so it was good to come to such an event with a cheerful demeanour. Dennis looked at the problems and ambiguities in board specifications. Yield is everything, and material usage is high on the list of priorities. He described how a supplier should provide a detailed checklist where the current capabilities are listed alongside the approved capability. You need to know about shrinkage factors; how drilled hole positional tolerance is ±0.025 mm for non-PTH, and 0.050 mm PTH was one example. Dennis ran through a comprehensive list of the detail of capability which is on offer, and which might be requested. He explained in depth what it means for a PCB company in terms of capability and the importance of the customer to know what is on offer – and what is not. Quality is in the detail, and the detail is what matters.

Phil Stoten is the Managing Editor of EMS Now, but in a previous incarnation was a circuit board buyer, and travelled the world sourcing circuit boards for his clients. As an ex-designer and ex-broker he knows the rules of the game, and he expounded on several of them. The relationship with the fabricator was important, obviously, but he urged people not to underestimate the PCB which is critically important; adding good components to a bad board is expensive and failures in the field are costly. Getting the technology right can save money.

Where to buy? – The factors of volume; technology; lead times; support (technical and sales) cost of ownership, and the relationship with the supplier are key. Reflect that the saying that "the world is your plating line" is essentially true. It may be the case that there are more graduates in the PCB industry in Taiwan than any other country, but some technologies are best sourced in Europe. He added that both Central and South American countries are coming on stream.

How to buy? – there are several routes – direct from manufacturer, or through a local PCB broker; through an Asian PCB broker; through a component supplier, through an EMS company or though a local manufacturer? All are important considerations, the broker brings lots of benefits, especially good service, but charges for it (and rightly so). The Asian broker may be lower in cost but offers a more detached service. As for an EMS company it depends on what they know, but using them could add to the cost of ownership of the board. Remember that local PCB shops have partners in Asia, and some times have a brokering business attached to them viz. Merlin Circuit Technology and Kestrel PCB Services. You do need to consider the solution to the volumes you want, the spend you have and the special features which are definitely needed.

Under the heading Who to buy from? Phil said that with whomever you were going to buy from you needed to build a relationship. If the source was Asia, go there and meet the people. Plenty of people have gone to Hong Kong expecting to find a large state-of-the-art PCB shop and have found a grubby office in a high rise in Kowloon instead. Do bear in mind that if you want to buy in Asia the start-up costs might run to some $20,000. You could save that money and work with a UK company. Summing up the need to take care of things such as the business; relationships, contracts; currencies; getting the engineering right; he said you need to make sure you are important to your supplier, it is a dangerous business out there!

We then had a second and welcome session with Pete Starkey – who talked about bare board reliability issues in lead-free assembly. The bare- board reliability issues arise during assembly and during fabrication and concern the effects of lead- free soldering on substrates, with interconnections and with temperatures running at 308 higher than with lead-containing solders. Pete discussed the subject of thermal stability of the laminate, the Tg, and with FR4 the predominant material, explained FR4 and its performance characteristics, and he moved seamlessly on to a look at solderable finishes. He stated that electroless-nickel/ immersion gold (ENIG) would tolerate the higher reflow temperatures, and should soon be 24 per cent of the world finish market. Of the others, immersion tin would account for about 5 per cent of the market, with HASL taking 28 per cent. Legislation may limit the use of immersion tin, whilst the solderability of immersion tin is good the higher reflow temperatures will accelerate the ageing of OCVSP finishes.

Prior to lunch, Paul Watson, Sales Director, and Jeremy Bacon, Export Sales Manager took the delegates on a tour of the CEMCO facility. CEMCO are to hot air solder levelling what Judy is to Punch, so they were just the people to confirm to the visitors that their experiences with lead-free had been entirely happy, and that lead- free solders were being used as a matter of course in both their Quicksilver vertical and Lynx horizontal solder levelling systems.

Feed the inner man and you have contentment. CEMCO's hospitality is legendary and the magnificent buffet lunch ensured that a very full but happy assembly sat down afterwards to listen to Bob Willis, who looked at board types and their finishes. Of the finishes currently being applied, gold was 60 per cent ENIG was 30 per cent with tin and HASL taking up the slack.

There were no major problems with stencil printing of lead-free solders, even with finer and finer pitches if the board build quality is up to the mark then some of the horror stories about lead- free are groundless. The impact of lead-free on solder finishes was discussed, the thickness of copper plating must be sound. The process must be controlled if fillet lifting and fillet tearing is to be avoided.

After tea, it was back to Bob Willis and the subject of initial supplier audit requirements. This was essentially a package of information, starting with general information on the company, and a list of the production equipment and capability for the products being proposed for fabrication. You need to procure a sample batch – assess the quality of samples to relevant standards – and produce a report to compare supplier's strengths and weaknesses. So often it is a measure of how a supplier reacts when something goes wrong, which sorts out the men from the boys. 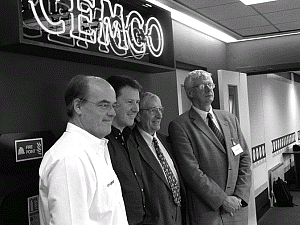 About three times as many Contract Manufacturers, assemblers, and design companies as had been expected came to Waterlooville for an excellent and varied SMART group Seminar held in the premises of CEMCO. In the field of lead-free the SMART Group have no peer when it comes to information dissemination, but here was a familiar theme placed in a practical environment and with complimentary contributions from three experts. A quality event, attended by the fortunate.