The directors of Earth Tronics have announced major new international investment to fund the dynamic worldwide growth of their exciting solder recovery system (SRS). The new funding will facilitate a dynamic expansion of the companys' global sales and marketing strategy, promoting its proven SRS2000 and SRS4000 range of machines, and accelerate its exciting new development programme (Plate 1). 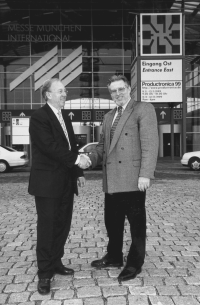 Since its launch in 1997 the company has made the old adage, "turning dross into gold", come true with its own designed and patented process for turning scrap solder dross into reusable solder ingots. In the wave soldering process 75 percent of the expensive solder used finishes up as scrap lead oxide which recovers very little value and leaves the problem of dealing with dirty, heavy, dusty, lead contaminated dross. The Earth Tronics SRS2000 and SRS4000 machines can be used on site by shop floor operators to recover, on average, 75 percent of the dross processed as reusable solder of exactly the same specification as the solder in the wave bath. Saving 75 percent of the 75 percent of solder that would otherwise finish up as scrap dross equates to a reduction in solder usage of over 50 percent. This level of saving has proved to give users a payback as low as 3.5 months and typically six to nine months.

The patented process developed by Earth Tronics simultaneously heats and compresses the dross in a sealed chamber, separating out the solder into an ingot tray and subsequently disposing of the dross through a sealed system into the normal dross bucket. No chemicals or additives are used, the system is extremely environmentally friendly and a big contributor to the ISO 1401 standard.

An impressive customer base exists including; Alcatel, AT&T, Compaq, Ericsson, Ford, GPT, Jabil, Panasonic, Philips, Racal, Solectron and Toshiba. The rapidly growing number of installations, already at over 400, is still only a drop in the ocean when you consider a worldwide number of wave soldering machines in use estimated at over 100,000. With a market of such a size and the introduction of lead-free solder costing more than present tin-lead solders, the potential for solder recovery and the prospects for Earth Tronics are very exciting.

Leading the expansion in Europe, the appointment was announced, at the recent Productronica Exhibition held in Munich, of Albertus Electronics as the major European distributor. Based in Holland and run by the experienced Dick Albertus, previously a senior director with Multicore Solders and Electrovert, Albertus Electronics is ideally qualified to promote solder recovery throughout Europe. Graham Norman, managing director of Earth Tronics, commented "We are delighted to welcome Dick to the team, his experience and background will prove invaluable as we embark on our expansion plans".

Dick Albertus is also well known, not only in Europe but also in America and Asia and Albertus Electronics is his own recently formed company. As well as marketing solder recovery systems the company will represent Multicore SPC in much of Europe, the two ranges of products being an ideal combination.

Dick is very enthusiastic about the potential for SRS, declaring "My interest is that SRS reduces the production and transport of harmful waste, and so is a very 'green' machine, which is easy to use and gives the added bonus of fast payback of investment."

Funding providers BA/CA.I Private Equity, the development arm of Bank Austria Creditanstalt AG and HSBC, David Hughes of BA/CA said, "We have invested in Earth Tronics in order to develop sales of its solder recovery systems throughout the worldwide pcb industry. Earth Tronics' innovative solder recycling technology provides customers not only with the potential to reduce solder costs appreciably but also meets their recycling/environmental objectives. We believe Earth Tronics to have exciting growth potential."

A new Web page is now available on www.earthtronics.com