The new CVO120 Rheometer from Bohlin Instruments (Plate 3) provides users with the capability of making rheological measurements on a wide range of materials. Typical industrial applications include paints, foods, polymer and composites and with the instrument's flexible and modular design, measurements can now be made on low viscosity liquids, viscous fluids, semisolids and solid materials. 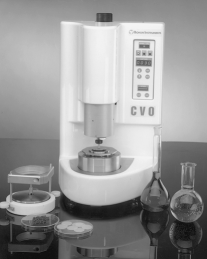 Designed around fully integrated electronics, the new CVO120 is said to be not only very compact, it is also extremely sensitive, with a massive torque, speed and position resolution. This means that even the most demanding applications are well within the CVO120's operating range.

One of the latest innovations from Bohlin is a custom designed clamp set which enables measurement of the mechanical properties of solid samples, such as polymers. When used in conjunction with the CVO120's extended temperature cell, it is now said to be possible to fully characterise a material's properties from -150oC to 550oC.

The CVO120's dual modes of operation enable it to use either controlled shear stress or shear rate to emulate process conditions found in many industrial applications, e.g. mechanical stability of paper coatings, reverse gravure coating of adhesives, spraying of paints, screen printing of inks, etc. Normal force measurement is also available, enabling properties such as extrusion die swell and coating characteristics to be more closely simulated.

Also new from Bohlin Instruments is the Peltier Plate 180 system, which it is claimed produces accurate and precise temperature control over the range -30oC to +180oC. Used in conjunction with any Bohlin rheometer, rapid temperature gradients can reportedly be achieved, enabling the most demanding industrial heating and cooling cycles being simulated. With the Bohlin Windows software it is possible to make both linear and non-linear temperature ramps with rates of 1oC per second being easily attainable.

The peltier plate is said to be extremely flexible, allowing the use of a complete range of cone and plate geometries, from 8mm to 60mm diameter.

There is also a custom designed solvent cover which automatically locates across the entire surface of the plate, so volatile systems can be measured without the risk of evaporation. For applications where slippage may be a problem, the peltier can be fitted with a serrated surface to ensure the sample remains in contact with the measuring plates.

One of the features claimed of the Bohlin peltier system is that it does not require a supply of chilled water for continuous operation - it can run from a steady stream of air. For ambient testing and above, it operates as a "stand alone" unit! This is in contrast to many conventional peltier plates that require a fluid supply at all times to avoid malfunction and "burn out".