Taubmans, of Australia, is the latest company to join the Nova Paint Club, which was founded in 1983 to promote co-operation between independent paint manufacturers.

Taubmans, which was elected to the club at its latest management meeting in London, brings the total membership to 16, representing the same number of countries.

Senor Allredo Achar, director-general of the Mexican company Comex, was elected president of the club in succession to Peter Surgey, of South Africa's Plascon Group (see Plates 11 and 12).

Snr Achar said: "I regard this as a great honour. Nova is quite unique in the world of paint. The mutual trust and friendship between the member companies has brought great benefits, especially in the fields of technology and logistics.

"Nova is now a very mature organisation and I can foresee that even greater advantages will evolve in the near future".

Ralf Johannsen, newly-appointed group managing director of Taubmans, said: "We are delighted to be joining such a prestigious club and we look forward to playing an active role". As good as his word, he had already agreed to take over the duties as the club's technical co-ordinator. 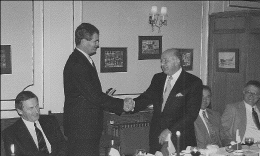 Peter Lovell, Nova's secretary-general, announced that the next annual conference would take place in Mexico City next May.