All you ever wanted to know about gate dielectrics but…

The incorporation of new dielectrics (oxynitride and high-k materials) into the gate region of transistors has introduced many new variables. Although it remains important to measure the thickness of these layers, other properties must be measured and controlled. For oxynitrides, the dose and distribution of the nitrogen are important. For the high-k materials, the complexity is even greater, the nature and thickness of any intermediate layer between the high-k material and the silicon must be known and controlled. The layer must be grown in such a way that the thickness, uniformity and composition are accurately controlled. If these parameters must be controlled, they have to be measured. Not all of the required measurements are physical in nature, some are chemical (for example, it is important to distinguish between hafnium silicate and hafnium oxide on silicon dioxide).

A detailed description of X-ray photoelectron spectroscopy (XPS) can be found elsewhere (Watts and Wolstenholme, 2003) and will not be given in-depth here. Briefly, XPS can determine which elements are present and their chemical states quantitatively. The technique has an information depth of a few nanometers, greater than the thickness of modern gate dielectrics. This means that the technique can probe the layer itself and the interface between the dielectric layer and the silicon wafer without removing material – it is therefore non-destructive. For a single overlayer (e.g. SiO2 on Si), it can measure thickness with very high accuracy and precision (Seah et al., 2004). If the technique is extended to allow the collection of photoelectrons with angular resolution (angle resolved XPS or ARXPS), it becomes even more powerful. Using ARXPS, the thickness of multiple layers can be measured (e.g. HfO2 on SiO2 on Si), the distribution and dose of nitrogen in oxynitride layers can be determined (a non-destructive concentration depth profile can be produced). It is also possible to establish whether the high-k layer is complete or whether it is present in the form of islands.

XPS is used to measure the quantity of each element at the surface of a substrate material. For example, it can determine the atomic concentration of hafnium on a wafer on which a layer of HfO2 has been grown. If the XPS system is capable of handling a 300 mm wafer then the uniformity of the hafnium layer can be determined over the whole wafer. Figure 1 shows the atomic concentration of hafnium at the surface of a 300 mm wafer, from such a map it is possible to determine the uniformity of the layer. Similar maps are possible for all of the elements present in a gate stack. 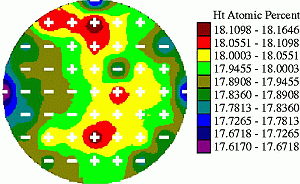 Moving to ARXPS means that many other parameters become available. The simplest of these is the measurement of the thickness of SiO2 on Si. Such measurements can be compared with ellipsometry for a set of wafers each having SiO2 grown to a different thickness (Figure 2). This figure shows that there is good linearity in the plot but there is an intercept of about 1 nm on the ellipsometry axis. The reason for this is that there is always a layer of carbonaceous contamination on the surface of the wafer once it has been exposed to air. In the ellipsometry data, this layer has been included in the measurement and its optical properties are similar to those of a 1 nm layer of SiO2. ARXPS excludes this layer from the thickness measurement of the SiO2 and can even measure its thickness. The value calculated using ARXPS for the thickness of the hydrocarbon layer is such that there is less than one monolayer of the material present. 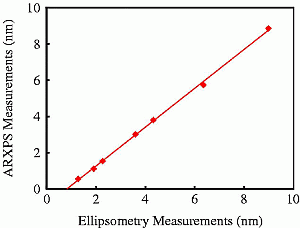 The next stage of complexity is a multi-layer stack such as HfO2 on SiO2 on Si. ARXPS can be used to measure the thickness of each of the layers simultaneously and without removing any material. Figure 3 shows the results of such measurements from a set of wafers having HfO2 grown by atomic layer deposition (ALD) on a layer of SiO2 nominally 1 nm thick. The measured thickness is plotted against the loading of HfO2 on each wafer, as determined by Rutherford backscattering (RBS). It can be seen that excellent linearity has been achieved in this figure and that the thickness of the SiO2 layer was independent of the thickness of the HfO2 layer, as would be expected. 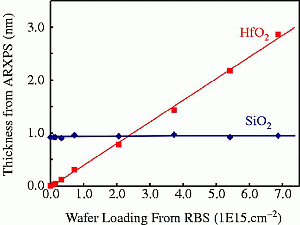 For silicon oxynitride dielectric layers, it is important to know both the dose of nitrogen in the layer and how it is distributed within the layer. With any method involving XPS, it is not possible to get an accurate measure of dose unless the distribution is known or an assumption about distribution is made. Using ARXPS and a method based upon maximum entropy (Smith and Livsey, 1992), it is possible to measure the distribution of nitrogen by constructing a non-destructive depth profile. Since profile construction does not depend upon sputtering with an ion beam, it does not suffer from the artifacts that are frequently encountered when using SIMS to establish depth distributions. An example of such a profile is shown in Figure 4. In this case, the nitrogen is found in a band near the middle of the layer. 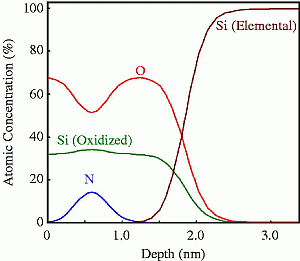 Having obtained such a profile, the dose can be calculated; in this case, the dose is 5.3 × 1014 atoms/cm2. In a recent paper (Torii et al., 2006), the authors have shown that this method can be used to determine how the nitrogen distribution changes with such treatments as annealing or re-oxidation. This is essential information for controlling the process.

The ability to measure thickness and dose means that these quantities can be mapped over the whole wafer. Figure 5 shows that ARXPS is used here to produce a highly repeatable uniformity measurement of thickness and composition. 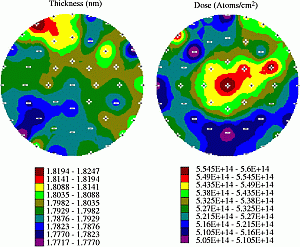 Chemistry of the intermediate layer

With the introduction of new materials into the gate region of the transistor, the chemical state of the elements becomes much more important. It is one of the strengths of XPS that it is capable of distinguishing between the chemical in the near surface region. An example of this is shown in Figure 6 which shows the silicon region of the XPS spectrum from two wafers on which about 1 nm of HfO2 had been grown by atomic layer deposition. The difference between the two wafers is the nature of the SiO2 layer prior to the growth of the high-k material; one was 1 nm of thermally grown oxide while the other was 0.5 nm of SiO2 grown by chemical means. The spectra have been normalized to the elemental silicon peak. There is a clear difference in the peaks associated with oxidized silicon. The differing intensities simply reflect the difference in thickness between the two layers while the difference in position is due to a difference in the chemical state of the silicon. In the case where HfO2 was grown on the thermal oxide it has remained as SiO2 whereas when the material is grown on the chemically produced oxide, much of it is converted to hafnium silicate. 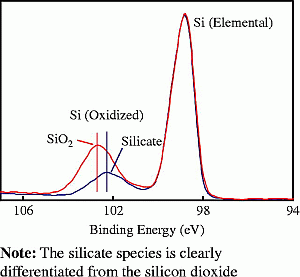 The traditional method by which ARXPS data are acquired is to collect a spectrum with the sample at some angle to the photoelectron collection lens. The angle is then changed by tilting the sample and another spectrum collected. The process is repeated with the sample at a series of tilt angles until data have been collected over a sufficient angular range.

There are two reasons why this approach to ARXPS cannot be applied to wafers. First, the method is too slow and, second, it is not possible to design an XPS tool that will allow a 300 mm wafer to be tilted through a large angular range. To overcome these difficulties, Thermo Fisher Scientific has developed analyzer technology that allows the simultaneous measurement of both the binding energy of the emitted photoelectrons and their angular distribution over a 60° range. This can be achieved without the need to tilt the wafer during the measurements. The technique is known as parallel ARXPS.

Now that many of the layers encountered in modern device structures have a thickness that is less than the information depth for XPS, the technique is gaining popularity within the industry. It can be used to characterize thin layers and their interfaces without removing material. Many of the physical and chemical properties of these layers can be accessed from a single ARXPS data set. Although this paper has concentrated upon gate dielectrics, the technique can be applied to other types of material such as barrier seed layers and even shallow implants.

John Wolstenholme has been working with surface analytical equipment for more than 20 years. He is currently a Marketing Manager with Thermo Fisher Scientific, specializing in XPS and Auger electron spectrometers.

The author gratefully acknowledges Dr T. Conard from IMEC, Belgium for providing many of the samples described in this paper along as well as the RBS data.