LSI Corporation (NYSE: LSI) has donated a replica of the first transistor to the Computer History Museum in Mountain View, CA, to commemorate the 60th anniversary of the invention of the transistor.

Invented by Bell Labs scientists John Bardeen, Walter Brattain, and William Shockley 60 years ago (Figure 3), the transistor is the building block of today's integrated circuits, the brains behind everything from computers and cell phones to guided missiles and heart pacemakers. The transistor was first manufactured commercially at the former Western Electric plant (which later became Agere Systems) on Union Boulevard in Allentown, PA, in 1951. Agere merged with LSI Logic on 2 April 2007 to form LSI Corporation. 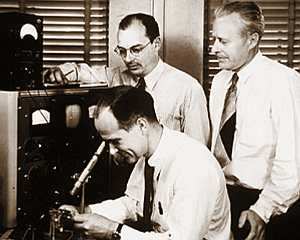 “It's often said that today's accomplishments are possible because we stand on the shoulders of giants from the previous generation,” said Abhi Talwalkar, president and CEO of LSI. “That statement is especially true today as we celebrate the invention of the transistor, arguably the most important invention of the 20th Century. Fortunately, the innovative spirit that created the transistor burns as brightly as ever today.”

The transistor, which replaced the vacuum tube, can be used to both amplify electrical signals and to switch them on and off. The transistor's smaller size, higher reliability, lower power consumption, and lower cost revolutionised both the form factor and economics of electronic devices. Since its invention, the size of transistors has continued to shrink to the point that today more than six billion transistors about one for every human alive today could fit easily in an area the size of a credit card.

Historical photos from the commercialisation of the transistor and podcast of an interview with Lance E. Metz, historian with The National Canal Museum in Easton, PA, which maintains the corporate archives of Agere Systems, and Douglas Peters, a retired member of the technical staff at the Allentown plant, are available.