In felawshipe, and pilgrims were they all

There is a sign above the door to some offices in a yard near London Bridge. It is blue in colour and whilst thick film pastes were not around in 1383, a pub called The Tabard certainly was, and it was an inn from which Sir Jeffrey Chaucer and nine and 20 others stayed prior to their journey to Canterbury that year. The Tabard was destroyed by fire in 1676, rebuilt soon afterwards and renamed The Talbot. The Talbot too has long since gone, but it is Talbot Yard that is the home of Mozaik Technology Ventures Ltd, and Steve Muckett is the MD. Steve is also the Chairman of iMAPS UK (Plate 1). 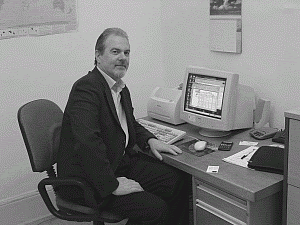 Steve comes from Wickford, Essex. He says that he was not particularly academic, and "coasted through exams'', but he worked hard enough to be offered a place at university, which is where he studied the love of his life – geology. Steve always wanted to be a geologist, but found that at University College Cardiff additional subjects were needed in the first year; so he chose metallurgy. After 3 years he won his BSc in metallurgy/geology and he also won the hand of a young lady who shortly afterwards became his first wife. This put the spoke in his dream "to do good things for a handsome salary in the Zambian copper belt", so he ended up training to be a teacher, taking his one year PGCE course at Aberystwyth.

After a spell as a science teacher in Tamworth, Staffordshire, endeavouring to drill some knowledge into 11-18 year olds, he decided that he did not really have the vocation to be doing the job, and started to look elsewhere. In a happily short space of time, he was offered a job at the International Tin Research Institute in Perivale. This was in research, working with "a really nice group of some 60 people, working in all sorts of research. Mine was on soldering technologies, everything from plumbing to electronics. Lead- free solders existed even then, I might add!" ITRI had its main source of income from tin producing countries, and Steve found that whilst the pay was not exactly wonderful, the consultancy work was fascinating, and he ended his time there as a section leader and as a specialist in soldering for electronics.

By 1984 it was time for a change. Steve joined ElectroScience Laboratories down in Reading, Berkshire, as a UK Sales Manager, and later took on additional responsibility for sales to West Europe, India and Eastern Europe.

"It was when I started visiting Eastern Europe, and when I met lots of people who had lots of good ideas, and some good products too, that I found that they were looking for someone to help them export into Western Europe. I saw in this the first stirrings of an idea to run my own company" said Steve. Some work on a sound business plan followed, with Steve recognising that the way forward was as an intermediary both for Western companies who wanted to do business in the Eastern Europe, and for Eastern European companies who wanted to do business in the West. On that simple basis his company has survived for 11 years now.

Luck always plays a part. For Steve it came in the form of an ion beam thinning machine from Hungary, which has been proven to be the best of its kind in the world, and a thick film materials and process technology from Lithuania that has no peer for fine line achievement. The former, from Technoorg-Linda, has been sold to universities in the UK and elsewhere, it is essential for people working in metallurgy, in semiconductors, and for those who want to make the best specimens for electron microscopy. The latter from Hibridas, Kaunas, allows extremely fine lines to be printed on ceramics, and this too enjoys global success, customers include Bosch, Du Pont, and it is widely sold throughout Europe and India and is beginning to have some success in the USA and other parts of Asia.

Mozaik (the name says Steve, travels comfortably into all countries except Japan where the word has quite another interpretation) have established themselves strongly in Eastern Europe. "I have two people in Brno, Czech Republic, one in Poland, both since 1998, all very clever technical people with fluent English, and since 2001 we have had an office in Kaluga, close to Moscow. I have my eye on the Ukraine, either Odessa or Kiev, it's all a question of timing.'' Supplying into the thick film industry is but a part of the business at Mozaik. Most comes from helping Western principles sell into Eastern Europe, companies such as BTU, ESI, to end users such as Celestica in the Czech Republic. "Both companies are part of a diverse range that we represent", says Steve. "We cover laser drilling, wire and die bonders, ceramics, DBC substrates, probes and probecards, used SMA equipment, and at Productronica last year we signed up with Process Automation Ltd (PAL), and Bruce Norsworthy is in Russia right now, discussing some new plating lines that are needed over there".

Mozaik are to exhibit in Moscow in May, at "Electronica Expo". Russia, said Steve, is the key to the continued success of the business, there is huge potential in ceramics, wafer fabrication, and it just needs the investment to "flow" through from the oil industries. Rather than into English football clubs, he might have added. He spends a lot of time travelling, Russia at least four times a year and frequent trips to other countries, such that he has now signed an agent in China for Hibridas. 'I will also go to the CII, Ceramics Interconnect Initiative event in Denver, Colorado, in April" he added, "That will be of great interest''.

Another string to his bow is Analog Paste Ltd. This is a company that specialises in thick film materials, and is a subsidiary of a Russian company called Energomera, based in Stavropol. "Energomera is a $60 million company, very big in sapphire production, and precious metal powders. The paste facility was established initially under a technology licence and support from Heraeus, but is fully independent. The solar cell industry offers huge growth market for thick film; we are talking here about tonnes and tonnes of material for a niche market. But it will require a lot of effort, there are some major players after it, but price is important. Happily, Russia is one of the major world producers of aluminium powder, so we should be most competitive".

Steve works in London and lives in London, such spare time as he has being much taken by his 18-month-old daughter.

Turning to iMAPS, how is the UK chapter faring? "It is always difficult to get people to serve on committees, due to the pressure of work, but we are fortunate to have a very good committee in the UK. We have decided that it preferable to hold one really good event a year now, rather than three smaller ones. Events such as conferences take up a fierce amount of time, and people in industry have less and less of it to spare. However we have over 200 members, and we are seeking younger blood to join us, as the average age of our committee members tends to be creeping up!''

What makes iMAPS unique? "It is one of the best international societies you can join," says Steve, "You can make friends all over the world in this industry; networking is important and iMAPS allows you do that. iMAPS has a very good chapter format that works in any country where the demand exists, indeed, Russia is now like set to become the biggest in Europe. We have existed in the UK, since 1967. Links within the chapters throughout Europe are excellent, and collectively there are some very good events put on, last year it was in Freidrichhafen, in 2005 it will be in Bruges. Happily, these big events are profitable, thanks to the exhibitors, so it does help us keep membership costs down to the minimum''.

If you are looking at the new technologies that are becoming important, then polymers, flip-chip, underfills, bare chip on boards, embedded passives, and low temperature cofire ceramics, said Steve, But added that whilst interest has shown some resurgence, the volume production of LTCC gone to Asia.

Mozaik has gone east, too, but the indications are that the future for them will be based a lot closer than, say, Beijing. Luck? Yes, a fair amount. But a strong sense of adventure, a love of travel, tenacity in loads, combined with a rather understated first-hand knowledge of both the technology and the market that drives it, makes Mozaik the company that it is.