On 28-31 January 2001, MicroTech 2001 returns to Europe (Plate 2). The flagship event of IMAPS-United Kingdom will be held at the Novotel, West London, England. It will host tutorials, three conferences and a small stand exhibition:

MicroTech 2001 exhibition will be held in a dedicated Exhibition hall, co-located with the catering facilities of the Champagne Suite at the Novotel, West London. The Exhibition will be a non-shell-scheme small exhibits event, to respond constructively to the requirements of IMAPS Exhibitors. 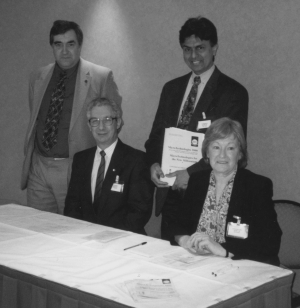 We invite authors of good original papers on design, technologies and applications to submit, by 15 August 2000, one page abstracts for the above conferences, to the MicroTech 2001 Technical Chair, Nihal Sinnadurai at sinnadurai@aol.com The papers will be selected by the Technical Programme Committee and authors will be notified in September. Accepted authors will be asked to provide an electronic copy (MS-Word) of the full paper by 10 December 2000 for inclusion in the proceedings.

Nihal Sinnadurai, vice chairman and chairman-elect of IMAPS-United Kingdom, has now left TWI to be able to work on a number of European Projects. He has joined Technology for Industry to work as part of the team of the pan-European Training initiative "EuroTraining", which was awarded to the new consortium as a result of a proposal constructed by Professor Sinnadurai.

He continues to manage the EU CRAFT project "EMCEM" which is now heading for success in developing integral EM shielding within plastic packaging of electronics and microelectronics. Prof. Sinnadurai also operates the advanced technology and training access consultancy ATTAC which is now located at new headquarters at Bligh Manor, Felixstowe, IP11 9RZ, UK.