In order to improve productivity and position Delphi's Vandalia operations to handle future business, a production team determined that a fully automated part removal system would help the plant meet its production goals and maintain a competitive edge. Because of the large open work envelope of the system, the team considered using three-axis gantry robots to unload the injection mold machines. However, after evaluating the flexibility provided by articulated arm robots for secondary operations, the team changed its mind.

In addition to providing more flexibility, Delphi required the repeatability that articulated robots could provide when compared to gantry devices. Repeatability was a critical factor considering the large production orders that Delphi had received to produce door panels, inserts and modules for a wide range of vehicle platforms.

A third factor in the decision to go with articulated robots was the plant's need to accommodate low ceiling height clearances – an issue that could not be satisfied by a gantry supplier.

Articulation is the key characteristic of the M-16iT. Compared to traditional linear gantries which typically use only linear rails to perform robot motion, the M-16iT use rotary axes or articulated “joints” for load/unload and post-processing motions and a linear axis for repositioning, allowing it to make flexible, human-like moves. 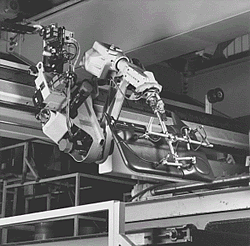 A second benefit of the M-16iT, which differentiates it from other industry standard gantry robots, is its six-axis arm design, allowing six degrees of robot operation. The six axes of freedom allow the robot to perform tasks that were typically reserved for a human operator. Because the robot comes standard with six axes, most operations, from part rotation to intricate part placement and assembly, can be handled without expensive options or fixturing. In addition, the robot's simplified installation alignment greatly reduces installation costs compared to standard gantries.

A third benefit of the rail-mounted solution is that end-of-arm-tooling is simplified, and in some cases can be shared between part runs. This means that the robot arm is flexible enough to extract parts from either the top or side of the machine.

The six-axis, S-420 robot offers an extremely long reach and a heavy payload capacity of up to 175 kg (386 pounds). The flexible S-420 also features a large work envelope and a 360° wrist rotation, making it easy to maneuver larger parts.

Here's how the system works

For most of the operations, the M-16iTs perform the work of typical gantry extractors. As the injection mold machines open, the M-16iTs enter the mold cavity areas, extract the parts and place them onto a takeaway conveyor. For some operations, the simple extraction is coupled with value-added operations such as part de-gate or heat treating. When one of the additional tasks is required, the robot positions each part in front of a stationary heat gun or material removal tool. The robot's ability to articulate the part allows for consistent positioning for the secondary operations.

Since the 3,000 ton machines do not allow enough ceiling clearance for a top-mounted robot, Delphi uses the S-420 robots to extract large inner door panels as well as interior and exterior trim pieces. The S-420s, which are installed beside each machine, easily change from one job to another with no production interruptions.

All of the robots operate using FANUC Robotics' HandlingTool application software. HandlingTool simplifies and standardizes robot setup and operation. Because little or no programming knowledge is required, HandlingTool is easy to learn and use.

FANUC Robotics had full turnkey responsibility for the system which currently operates 24 h per day, 5 days a week.

Delphi's production team noticed improvements to the system almost immediately after the robots were in operation. First, the robots perform part extraction at much faster speeds than gantry robots.

For Delphi, the FANUC robots' repeatability and accuracy allow for consistent part extraction, which has led to consistent mold cycles and higher quality parts.

Not only has yield and quality increased, but the robots provide Delphi with maximum flexibility that will enable the plant to easily handle future automation applications.