The ABB IRB2400L robot has already completed a lengthy initial trial period, during which it was employed within a mocked-up manufacturing cell, carrying out simulated machine-tending in support of turbine aerofoil production. 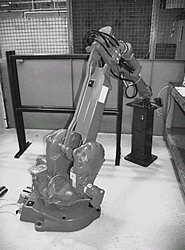 Centrax operates over 100 CNC metal cutting machines and the project study was initiated to look at ways of automating some of the operations that link these machines together. It is hoped that, in time, automated machine-tending will increase productivity and reduce manufacturing costs, allowing the company to maintain competitiveness against low cost economies.

The company employed graduate student engineer Andrew Barrington, on a 2-year secondment through the government sponsored Teaching Company Scheme, whose responsibilities included identifying machine- tending operations that were most suitable to automate. This procedure took 6 months, in which a blade root manufacturing process that included machining, de-burring and dot marking was identified as the most suitable to trial.

After this, the Centrax project team, headed by electronics engineer Kevin Vickers, started the process of robot selection. An initial “field” of eight manufacturers was rapidly whittled down to four, then to two, and eventually to one, ABB.

Mr Vickers says: “The final choice was due, in no small part, to ABB's pro-active stance in working closely with us to find a suitable robotic solution. Another significant factor towards the end of the selection process was the excellent package of standard software options and competitively priced extras available with ABB robots.”

One such “extra” is RobotStudio, the first, easy- to-use software for the simulation and true off-line programming of a robot system on a standard windows PC. RobotStudio uses an exact replica of the real ABB robot controller and can generate precise robot programs. Operators can watch a 3D simulation of robot movements, step-by-step, to see if the virtual robot is reaching all positions needed without costly collisions.

“When we first looked at simulation software we regarded it as a bit of a toy,” adds Mr Vickers. “However, we quickly came to realise that accurately orientating a workpiece in a three dimensional environment is not that simple, and to plot a complete production cycle on a drawing board is extremely difficult, if not impossible.”

“RobotStudio has great potential as an aid to the effective design and implementation of the production cell and appears to be 'head and shoulders' above the other robot maker's proprietary software that we have seen, according to project manager Vickers. Third party software is priced way beyond our budget.”

RobotStudio, in conjunction with ScreenViewer, has been used for the development of an operator interface for process management. The process logic is handled by the robot controller, without the requirement for a separate programmable logic controller (PLC). The ABB controller's ScreenViewer option allows the set-up of operating parameters for a specific batch of work. Thus, instead of following a fixed repetitive cycle, the robot will prioritise its actions according the state of these process parameters.

Trials will now advance to pre-production, with a second ABB robot providing “live” tending of machining, de-burring and dot marking operations within a controlled environment. The first robot will be continued to be used to evaluate other manufacturing processes that may benefit from automated machine-tending.

Should pre-production trials go as planned, a permanent production installation is to be established on the shop floor.