Clares Merchandise Handling Equipment Ltd, of Wells, Somerset, which also produces airport luggage trolleys, estimates its original IRB6/S1 robot – bought in July 1977 and fitted with ESAB welding equipment for arc-welding the trolleys – clocked up a colossal 88,000 h of service in its working life. 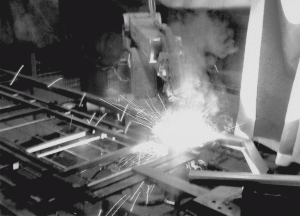 Although not fitted with run time hour clocks or weld-counters like modern ABB robots, the company calculates that the old-stager would have helped to produce over two million trolley sub- assemblies and made a staggering 36,360,000 individual welds.

Julian Holley, Clares' Electronic Systems Manager, said: “At the time of its introduction in 1974 this robot design was nothing short of a revolution. The all-aluminium arm (completely electrically driven) was light and fast and the closed-loop servo system, controlled by a micro- processor, made it accurate and flexible.”

“When computers are so much part of our daily lives it is hard to imagine the technological advance that these machines must have represented. At a time when computers were the preserve of large multinational corporations and NASA, it must have been an extraordinary event to have not only a computer, but a computer controlling a robot in a small factory in the sleepy city of Wells, back in 1977.”