Robots  the case for taking on more tasks

Robots – the case for taking on more tasks

Robots are all about flexibility. When unloading plastic injection moulding machines, they come into their own when a number of subsequent tasks are combined into one. If, in addition, a number of variations from a family of components are to be produced, then the justification becomes irrefutable.

That is exactly the situation at Bespak, a specialist producer of drug delivery systems based in King's Lynn. The company specialises in the co-development, in conjunction with pharmaceutical manufacturers, of a range of customer-specific drug delivery systems that include metering valve technology and flow control valves for medical use.

To give an idea of size, the group has over 1,000 employees worldwide and approximately seven million components are produced everyday. Pharmaceutical products demand precision components with zero defect quality. There are also the exceptionally high hygiene standards to be taken into account.

When a project for three inhaler components came up, it was decided that these were ideal candidates for using a six axis robot to unload rather than the normal beam type three axis unloaders. Stafford Moss, project engineer at Bespak, set a number of targets that included:

After evaluating various options, the injection moulding machine selected for the project was a Fanuc roboshot 100 tonne machine. For component handling, a Fanuc M6 robot was specified (see Plate 7). This robot can carry a combined weight for tooling and components of up to 6kg at the end of arm. The robot unloads the moulded components from the roboshot into boxes, and handles the boxes and their lids. One complication is that two parts have to be printed and the third not.

There is one inbound conveyor to the system and two outbound conveyors, one in front of the moulding machine and the other adjacent to a pad-printer which is fed by a vibratory bowl feeder. 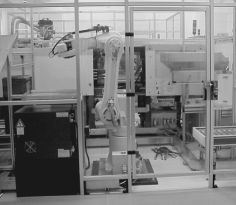 The cycle starts with an empty box being lifted from the inbound conveyor to the loading station on the outbound conveyor after having first removed its lid to a park stand. Parts are then counted into the box from the moulding machine until it is full; the robot then places the lid on the box, then stacks a second empty box on top, which it then proceeds to fill; full boxes, stacked two high, are then fed out of the cell.

The decision to build the system around a six axis robot was based on a number of factors, not the least of which was price. Without doubt, if the problem was just unloading the injection moulding machine, a cheaper solution would have been a simple three axis unload device.

However, to carry out the subsequent operations of printing and packaging would have needed more complex handling and control equipment. With the solution installed, all the handling conveyors are slaved to the robot controller. In addition, the controller communicates with the printer to ascertain when the box is full and to indicate when another box has been delivered.

According to Stafford Moss, the Bespak project engineer, "The benefits are much more than cost saving. The more traditional solution would have required additional equipment, each with its own reliability factor. The accumulative impact on overall reliability would have been greater than a single piece of equipment, which is what we have with the six axis robot".

He went on to say "Although the realised benefits justified the route we followed, at the end of the day one of the less measurable factors played an important role in the final decision.

He was referring to the concept of "manufacturing cells" where all facilities required to produce a family of parts are grouped together. This can dramatically reduce lead time with consequent reductions in cash locked up in work-in-progress.