New "i-WALK" technology allows robot to walk like a human

"Honda has taken up a new challenge in mobility", said Hiroyuki Yoshino, president and CEO of Honda Motor Co., Ltd. "With this development of a two-legged humanoid robot that can walk, Honda wants to create a partner for people, a new kind of robot that functions positively in society." 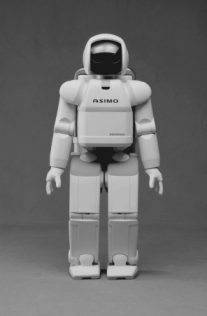 Honda's basic research and development in humanoid robotics began in 1986 with the goal of developing an autonomous walking robot that can be helpful to humans as well as of practical use in society. In 1996, Honda's prototype robot P2 made its debut, followed by the more advanced P3 in 1997.

ASIMO – which stands for Advanced Step in Innovative Mobility – is a further evolved version of P3 in an endearing people-friendly size that enables it to actually perform tasks within the realm of a human living environment. Honda's new i-WALK technology adds a sophisticated "predicted movement control" feature to the earlier walking control technology of earlier Honda robots. As a result, ASlMO walks more smoothly, more flexibly, and more naturally, with instant response to sudden movements. Further, the range of movement of its arms has been significantly increased and the robot can now be operated by a new portable controller for improved ease of operation.

At 120cm (just under 4 feet), ASIMO is significantly smaller than Honda's earlier humanoid robots. The smaller size was chosen to allow it to operate freely in a human living space and to make it people-friendly. Honda research determined that a robot height ranging between 120cm and that of an average adult is ideal for operating in a human environment. This size allows the robot to perform basic tasks such as operating light switches and doorknobs.

Compared to P3, ASIMO's height was reduced from 160cm to 120cm (3.95ft) and its weight was reduced from 130kg to 43kg (94.8lb). A height of 120cm was chosen because it was considered the optimum to operate household switches, reach doorknobs in a human living space and for performing tasks at tables and benches. ASIMO was made much more compact and lightweight by redesigning its skeletal frame, reducing the frame's wall thickness and specially designing the control unit.

Predicted movement control (for predicting the robot's next move and shifting the center of gravity accordingly) was combined with existing walking control know-how to create i-WALK (intelligent real-time flexible walking) technology, permitting smooth changes of direction. Additionally, because ASIMO walks like a human, with instant response to sudden movements, its walking is natural and very stable.

To improve the operation of the robot, a flexible walking control and button operation (for gesticulations and hand movement) can be carried out by either a workstation or from a handy portable controller.

By designing ASlMO's shoulders 20 degrees higher than P3, elbow height was increased to 15 degrees over horizontal, allowing a wider range of work capability. Also, ASIMO's range of vertical arm movement has been increased to 105 degrees, compared to P3's 90-degree range.

In addition to its compact size, ASIMO features an attractive, people-friendly design.