It's a fact of life that the weak link in many production chains walks in on two legs. Nowhere is this more true than manual machine loading where loading can be an excessively large part of the floor-to-floor cycle time.

Operators stop for lunch, go to the toilet or simply chat to the bloke on the next machine. Every time the machine stops, that production time is lost forever, it cannot be regained. And that costs. With overheads an operator can cost »25,000 a year; year in year out. That's just for a single shift. Double or treble shift the machine and the operator costs do the same.

A typical machine loading robot on the other hand costs about »25,000 period and can run 24 hours a day, without increasing by a factor of three for triple shift work. It doesn't take a rocket scientist to work out that pay back on machine loading robots can be dramatic - under six months for double/treble shifted installations.

Productivity gains are made irrespective of any increased machine utilisation. There is no lost time, and the robot, because it is interfaced with machine is faster and more accurate at positioning the component. While the cutting element of the cycle obviously stays the same, the loading time can be reduced.

This is confirmed by a subcontractor in the USA who used a Fanuc LR Mate robot to load die-casting into a machining centre. The parts are picked from a vibratory bowl feeder and loaded. Completed parts are ejected and transferred away from the machine by conveyor. Because of the short cycle time, the machine was running slower than optimum speed to compensate for human fatigue (see Plate 5).

After fitting the robot system, output was increased to 500 parts/hour which represents a 30 per cent boost to productivity - and the operator was released for less onerous work.

If the robot is used to equip the machine for "lights out" operations then even more dramatic productivity gains are on the cards. 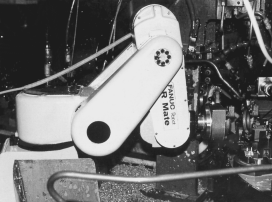 An automotive component producer was faced with the problem of maintaining 24 hours/day production and decided that robot loading was the best solution. The production cell consisted of four twin spindle lathes, each was equipped with an LR Mate 100 robot. Because of the small footprint, the robots could be mounted on top of the lathes.

Each robot collects parts from a vibratory bowl feeder and feeds it to the first chuck; when completed it is transferred to the second chuck, the finished part already in the second op chuck is ejected onto a conveyor. Built-in sensors verify that each part is correctly seated in the chucks. With the loading system 320 parts/hour are consistently produced on a 24 hour basis.

From these examples it can be seen that the cost of automating machine tooling has been transformed in recent years. This is no surprise, labour costs move unrelentingly upwards while anything electronic - including robots - has tumbled in price.

Just consider the implications of the following figures. If an index of 100 is set for labour rates and robot prices in 1988 by 1993, this had changed to 140 for labour and 70 for robot prices.