As many as 27 separate axes can be controlled simultaneously by the new Motoman XRC robot controller, now standard for all installations configured by, or on behalf of, Motoman Robotics (UK).

The device marks a major advance in technology in that it is the first with the capability to control three six-axis robots and synchronise their movements with a variety of other equipment such as gantry systems, linear tracks and rotary indexers.

Only two robots could be handled by the previous Motoman controller, although when introduced four years ago it was the most powerful then available.

In addition, the new system incorporates ample digital I/O capability for switching welding power supplies, paint spraying units, machine tools or other equipment. Multi-tasking capability allows up to six separate operations to be executed at once.

Programming of the system is via a hand held pendant (see Plate 7) with multi-lingual display on a back-lit, 12-line screen using the Inform II programming language. Program development is assisted by pull down menus and icons. System memory can be increased from the standard 5,000 steps/13,000 instructions to 60,000 steps/20,000 instructions. 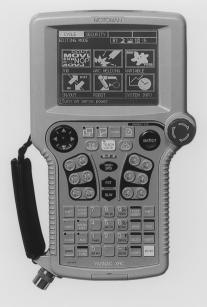 The unit is designed for ease of installation and has minimal space requirements. Plug-in cable connections are used, while additional expansion units can be added and docked into the main controller using ports on the top and sides. Compatibility with Ethernet, Profibus, Interbus-S, Device-NET and other factory networks allows the system to be controlled and monitored remotely.