Robot orders rocket to an all time high

Robot orders rocket to an all time high

"Never before have so many orders for industrial robots been placed by industry, pointing towards an acceleration in the drive to automate", says Jan Karlsson of the United Nations Economic Commission for Europe (UN/ECE), which together with the International Federation of Robotics (IFR), regularly survey the robot market.

Worldwide orders for industrial robots surged 20 per cent in 1999 compared with 1998. Firms in North America led this drive to automate, as orders for robots skyrocketed 60 per cent (see Figure 1). While European businesses stepped up orders by a more modest 12 per cent, this was still impressive growth considering that a surge of 31 per cent had already taken place in 1998. 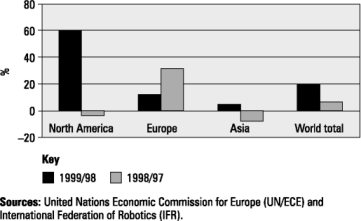 ... led by automotive as well as food and other industries

The automotive industry continued to lead the drive to robotize, boosting orders by 24 per cent compared with 1998. The other sectors of manufacturing together increased orders by 14 per cent, most notably the food industry. Generally, industries exposed to strong international competition are investing in robots in order to remain competitive in increasingly global markets.

This surge in robot investments, in particular by industry in North America and Europe, which are rapidly catching up on Japan, has several explanations. A central reason is that prices of robots are falling rapidly relative to labour costs. Robot prices in 1999 were 40 per cent lower than in 1990 (see Figure 2). At the same time today's robots have much higher performance than those produced in 1990 with respect to versatility, speed, accuracy, and above all computer power. A quality adjusted price index would therefore show an even higher price reduction. 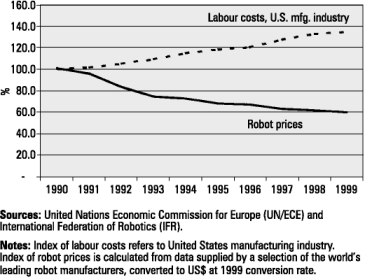 While prices of robots have plummeted and quality has increased, labour costs have risen steadily. In the United States, for instance, labour compensation in the manufacturing industry rose by over 30 per cent in the period 1990-1999 (see Figure 2). With each passing year robots are becoming more profitable.

The enormous automation drive that took place in Japan in the 1980s was to a significant extent driven by a severe labour shortage. The same phenomenon is now occurring in North America and in many European countries.

While robots have long been prized for their ability to automate elements of the manufacturing process, they are beginning to play a key role in ensuring that all the processes involved in production work together effectively. Tighter integration of processes such as customer ordering, product design, purchasing, assembly, inventory control, product delivery and so on is also contributing to higher productivity and to the increasing demand for robots.

Robots also ensure that output can be increased in a fairly short time and, because of their inherent flexibility, can be easily and rapidly adapted to new product models. This is becoming increasingly important as the lifetime of products is steadily falling. There are examples of industries today that earn over 50 per cent of their revenue from products that did not exist one year ago!

In some countries a 35-hour workweek has been or soon will be introduced. This will give further impetus to robotization, as a robot's workday can easily be increased from 12-16 to 24 hours, providing there is a demand for its output.

With technological development robots have become so accurate that, in many cases, it's hardly possible to ensure the same quality of output, and above all a constant high quality level, with manual operations. Older readers might remember the so-called "Monday cars" that were sold in the 1960s and 1970s. Since then automation and robotization have eliminated many of these deficiencies caused by human errors and negligence, and are now one of the most important means of ensuring high and constant quality of manufactured products.

Robots will boost investment in 2000 and beyond

A large share of the orders placed in 1999 will not be delivered until the year 2000. As most robots insfstalled today are part, and often the centrepiece, of integrated manufacturing systems, this points to continued high investment not only in robotics but also in a broad range of non-robotic equipment, machines, computers, software and systems engineering required to complete these systems.

"Rapidly falling relative prices of robots and increased competition through globalization will spur continued high growth in robot investment in the years ahead", says Mike Wilson, chairman of IFR. "We have only seen the first phase of the robotization drive, which has mainly focused on the automotive industry. The food industry and all other manufacturing industries as well as many non-manufacturing sectors will significantly step up their investment in robot systems", predicts Jan Karlsson, UN/ECE.