New Land-Rovers get the expert touch

New Land-Rovers get the expert touch

The new contract from Lamb Technicon - worth more than »140,000 - is for a custom-engineered six-station system being installed as part of a new robotic welding line at Land-Rover's Solihull plant. The Expert lift and transfer system will be used in conjunction with 14 ABB Series 4 robots which will automatically assemble engine compartments for Land-Rover models powered by the company's new KV6 petrol and M47 diesel engines (see Plate 4).

Like the previously-announced installations for the Jaguar "S" Type saloon and a new sports utility vehicle to be assembled by Chrysler in Mexico, the latest equipment incorporates a "soft-touch" pick-up feature that eliminates the risk of panel damage, and smooth acceleration and transfer characteristics achieved through Expert's proven cam-based drive system. 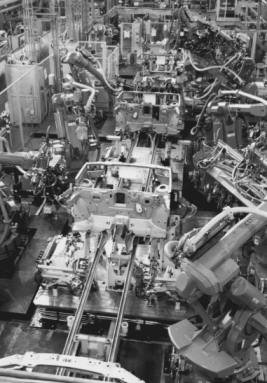 "The order was won in the face of stiff international competition and underlines the proven reliability and performance of our equipment", says Expert UK's general manager, Angelo Luciano. "It also reinforces our position as a leading supplier of precision indexing and assembly line to the world's automotive manufacturers and adds impetus to the expansion of our motor industry activities into vehicle front end module technology and fuel system components."

Expert UK is a leader in the design, development and application of precision indexing drives. The company also supplies first and second tier automotive suppliers, as well as machine tool manufacturers and automated system builders. It has grown consistently since opening its first branch office in 1991 and today is headquartered at the heart of the UK's communication network in Coventry.