Communications partnerships: getting media pros to tell the library story

The inspiration for this column came when my Director of Marketing, Gerald Brooks, handed me a sheet with a breakdown of recent pro bono contributions from media companies to the St. Louis Public Library. Figure 1 is the report that Brooks handed me. 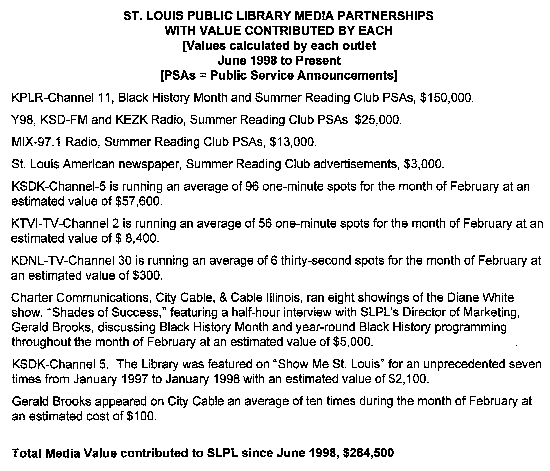 To summarize, St Louis Public Library since June 1998 has obtained more than a quarter of a million dollars in free advertising. The respective media companies, not the library, determined the value of their contributions as part of their regular time-audit procedures. An accounting from a different six months would list some contributions from different outlets, but the next six-month bottom line contribution will not be much different from this one.

This pro bono media contribution has extraordinary importance for the future of SLPL. The next section of this column explains why. After that, I will outline how SLPL entered the advertising business. Then, my assessment will conclude with the costs and benefits of media partnerships.

The importance of library advertising

Every library has membership turnover. The "churning" of users is the same element experienced by public utilities like those furnishing water, power and communications services. Folks move in and connect. Folks disconnect and move out. Legitimately calculated card counts are a good measurement of the library's connection to the community.

In a city like St Louis, Missouri, one with mostly older housing, a high poverty rate, a low literacy rate and a high rate of single-parent households - has a high "churn". The population changes markedly just from one day to the next. The effort necessary for a utility, or a library, to stay connected in such a community is high, but maintaining that connectivity is imperative for the future operational health.

In order to have card holding mean much in this high "churn" setting, SLPL tightly limits the duration of memberships before re-registration. If a card is not used at least once in the 12 months following its last use, that cardholder drops automatically off the library's membership roles. Re-registration of a "former" cardholder occurs automatically in the computer system when a patron reappears even after being a statistical non-member for several years.

Within this context, out of every three cards that come up for annual renewal each month, one cardholder will disappear forever, never to be heard from again. To put the matter simply, SLPL operates a customer-driven service business where one out of every three customers has to be replaced by a new customer every month out of every year just so that cardholding membership does not decline. To increase the membership, which SLPL has accomplished through the past decade though library district population is declining precipitously, we have ambitious efforts.

To deal with this statistical reality, we market SLPL aggressively. Every branch is an outreach point to serve neighborhood groups, especially children, as well as a service location. There is a system-wide outreach program. SLPL operates an extensive special events program, including events organized at both the branch level and for the system as a whole. Our 1997 Signature Series, for example, featured outstanding authors like David Halberstram, Gail Sheehy, Susan Sontag, Jane Bryant Quinn, David McCullough and Toni Morrison, but these are only six among hundreds of special library events.

In addition, the library contracts for an ongoing direct mail program, bulk mailing over 50,000 pieces monthly to cardholder households (many with more than one cardholder) along with special mailings to daycares, senior centers, elected officials and civic leaders, friends and potential friend's members.

The decision to purchase advertising

A half decade ago, despite all these efforts, the library's board and management decided that SLPL still had a "publicity problem". Quite simply, we saw that problem as general media inattention. As the library's media consultant, Tripp Frolichstein, President of MediaMasters, is fond of pointing out, news editors usually look for the compelling "Cs" of news. Those are: "catastrophe, chaos, conflict, confusion, competition, contradiction, corruption, crime crisis [and] color (human interest) and the Ss of news: secrets, sensationalism [and] sex". Fortunately, most libraries usually do not fall into most of these newsworthy categories. Hence, news editors consider them boring.

Our perception of general inattention came in spite of a good deal of episodic media coverage. "The great paper airplane fly off" usually attracted a TV camera or two during Aviation History Month. SLPL's extensive Black History Month programs brought cameras, microphones and print journalists to cover many of the principal events or best-known performers. One or another kick-off event for Summer Reading Club almost always brought print and camera reports for their annual dose of "cute kids reading". And, special exhibits, both locally produced and imported, usually obtained some coverage. Often, however, the stories we wanted to see covered, especially the library's ongoing vital community reading and information services, did not receive the attention that library staff and board thought they deserved.

Question: How to obtain the media coverage we wanted when we wanted it?

Answer: Buy advertisements in the media we most wanted when we wanted it and directed to the audience we wanted to reach within the budget available.

Four years ago, within an overall budget of $17,000,000 ($15.3 million from annual tax revenues), we set aside $100,000 to purchase advertising. As the primary market we wanted to influence, we chose women age 24-55. Historically, this group represented our heaviest user group both for themselves and because of the children for whom they served as the primary caregivers.

Within our budget, we focused our "print" advertising dollars on bus cards in Bi-State Transit buses and Metrolink light rail cars and on billboards, mostly smaller neighborhood billboards. Because of the high cost of television, we focused our electronic advertising dollar on radio. In newspapers, we generally chose market-specific weeklies rather than the more expensive and more general audience daily.

Working through a professional media buyer, we purchased 30-second spot ads on six radio stations, three focused on white women aged 24-55 and three focused on black women of the same age. We tended to and continue to advertise in clusters, buying ads for a month or two, then backing off, then hitting again with a new series or (to save money) repeating an earlier series. All electronic ads are planned to include tagline attachments that we use to promote a specific program like Summer Reading Club participation or a specific event like the appearance of author, Toni Morrison.

Many of these quickly became advertising "partnerships". After we became media buyers, the media outlets often donated public service announcements on behalf of library services and programs. Our media buyer and our marketing department staff also established true partnership relationships with several television stations. Library staff worked with media staff to position the library as a good story source, including a resource that could be counted on to help develop content and graphics for developing stories. Media outlets frequently promote themselves; the library sometimes became part of such promotions. For example, "KPLR-Channel 11 Kids", a high-energy dance troupe that promoted the station, while making PSAs promoting the library.

Benefits and costs of library advertising

The immediate benefit of the paid advertising campaigns is that new people began to show up at library events - and as users of library services. Although the library's direct-mail mailings and word-of-mouth from other library users remained the principal reason that attendees gave for knowing about events, at some programs as many as one-third of attendees said they had come because of the electronic advertisements.

The second benefit of the advertising campaign came in generally heightened community visibility and recognition. Public services staff quickly noticed that library patrons mentioned the content of the advertisements, especially the humorous themes. One billboard campaign in particular captured the public fancy. Two boards in that campaign,

The third and most important benefit came in the increased respect and attention the library gained from its media associates. The purchase of advertising time brought our marketing staff into new business contacts with the staff of media outlets. And, as staff became involved in these relationships, they gained sophistication and experience in working with media. From these experiences developed rich partnerships. All of these experiences led to better and more library story placements. The results: In a typical month, it is not unusual for St. Louis Public Library to receive 50 stories in electronic and print outlets. And, in the past month, the number was 58, not bad coverage for a library in any sized media market.

The fourth benefit came in the surprisingly high value received free for the amount spent on paid advertising. The Figure that begins this column illustrates the point. In a six-month period, during which the library spent about $50,000 in paid advertising, the institution received free coverage value-audited by the various stations and journals at $264,000. This works out to about $5 free for every $1 spent in paid library advertisements.

The downside? First, I have no doubt that some library professionals will protest that libraries should not use public money to promote their own institution. To them I say, every library administration needs to determine if institutional promotion is needed in their particular operating situation. In St Louis's case, advertising is not a luxury but a necessity of good operation, parallel to a paid professional security staff, clean restrooms, new book stock and computers connected to the Internet. Intriguingly, with nearly five years of paid advertising experience behind us, the number of citizen complaints about the program have been so few that within the institutional scheme of things, they are hardly on the radar screen of potential troubles.

Second, just like every library partnership, media partnerships have management costs. Somebody always has to plan, oversee execution, keep an open eye for rip-offs and make sure that benefits exceed costs. Good library-media partnerships do not come any easier than does the building of a high quality staff team. Both require time, thoughtful effort and more than an occasional aspirin.

To sum up, paid advertising has been the basis for SLPL to create a new kind of media partnership, one that has brought the library not only enhanced visibility and increased program attendance but a high level of "free" media attention as well. Altogether SLPL's communications partnerships have resulted in getting media pros to help tell the library story effectively and at good value to the institution.