Return of the Vulcan?

At 3.00pm on 5 September 1999, a Vulcan jet bomber, the design that inspired both Concorde and the Stealth bomber and the last example to fly, taxied down the runway at Bruntingthorpe, Leicestershire, UK for the final time before retiring to its hangar ... but if the enthusiastic and committed project team at the Vulcan Operating Company is successful, the fully-restored Vulcan will take to the air again later this year and once again become the main attraction at outside events.

The sheer spectacle of a delta-winged Vulcan in flight has thrilled spectators everywhere and ranks alongside the RAF's Red Arrows display for popularity due to its impressive size, power and presence (Plate 7). 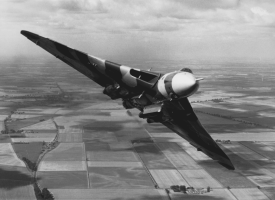 According to Vulcan pilot David Thomas:

It is the ability of this large aircraft to manoeuvre in a tight area and its capacity to climb away almost vertically on raw power that impresses the pilot as much as the spectators.

As an example of wholly British aviation design, innovation and technology, the aircraft is thought to be almost without parallel and, significantly, many of the system and technology innovations are found on every jet aircraft.

In total, 134 Vulcan V-bombers were built at Avro's Woodford plant in Cheshire, UK, and it became the mainstay of Britain's strategic shield against the Soviet Bloc during the Cold War. The Vulcan was in service from 1956 until 1984 but only saw action during the Falklands conflict when it set a record for the longest range bombing raid ever.

Of the 16 remaining Vulcans in existence, most are on static display and only three are capable of taxiing under their own power. Of these three, the aircraft (XH558) was the last in RAF service, has been fully maintained, and is by some way the closest to being airworthy.

The Vulcan Operating Company explains that it has been established in order to the raise the necessary funding required to return the aircraft to display flying by exploiting its marketing potential. The company's financial targets are believed to be modest set against the benefits and compared to many commercial sponsorships. Around £3 million is said to be required for up-front restoration and flight readiness followed by operational costs of £750,000 per year during a four-year display period.

British Aerospace is one of the organizations involved in this unique project on a commercial basis, and is pleased to be giving its support to the Vulcan Operating Company as it sets a benchmark standard that includes a comprehensive business and funding plan. The Vulcan had a first class safety record in service and XH558 has been kept in good condition and is well supported by full documentation and an extensive spares inventory. The aircraft is a fine example of British engineering excellence and an important part of the nation's aviation heritage.