Motivair is one of Europe's leading distributors of compressed air and product finishing equipment and it has always stocked a good range of air power tools including drills, screwdrivers, nut runners, grinders and all standard assembly air tools. 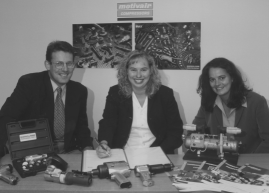 Staff at each of the six Motivair branches have visited Ingersoll-Rand's training centre to fully develop their ability to advise on and supply the new range of tools. Nicola Sharples, the distribution sales manager for Ingersoll-Rand, said, "The Ingersoll-Rand and Motivair tie-up on tools provides the perfect synergy. Motivair has what we believe is the best range of tools available, and its professional approach based on a service and advice mindset cannot fail to meet demand".