Oil pipeline sections vital to North Sea oil production are being shot-blasted and spray painted using quality dry air from a recently commissioned HPC screw compressor installation at a new Gemini Corrosion Services facility in Montrose, just south of Aberdeen (Plate 1). The mild steel pipeline sections, up to 65ft long and of 21in. bore, are given the maximum possible corrosion protection by pressure grit blasting to remove all existing corrosion. They are then treated with a sprayed anti-corrosion paint or metal finish. 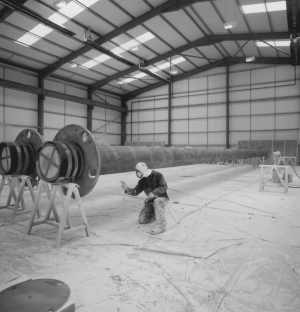 Gemini Corrosion Services Ltd's headquarters are in Stonehaven, just up the coast from Montrose, where the company has its original similar treatment facility for sub-sea pipelines. Back in 1994, when the vane compressors with which the company was then equipped at Stonehaven were giving trouble, Kerr Compressor Engineers of East Kilbride, the HPC authorised distributor for Scotland, put in a bid to replace them with an HPC installation. However, another major brand of compressors was selected at that time because the supplier offered an installation at a lower price, which was apparently a better deal.

It is reported that over the next couple of years, overheating problems and insufficient compressed air from the new installation caused the engineering team at Gemini Corrosion Services to contact Kerr Compressor Engineers again for advice. Ian Kerr, managing director of the East Kilbride company, evaluated Gemini's compressed air requirement.

He suggested replacing one of the relatively new non-HPC 75kW compressors with an HPC Plusair DSD 201 direct-coupled compressor because the efficiency of the direct-coupled unit would give the company the additional compressed air it needed without causing power penalties, the total power consumption on the site already being near the upper limit. Kerr Compressor Engineers' solution replaced the 75kW compressor, which provided 379cfm at 10 bar with an HPC DSD 201 compressor which delivers another 189cfm at 10 bar for an increase of only 35kW in power consumption.

This arrangement at Stonehaven, which reportedly remains in trouble-free use, has been so successful that, when Gemini Corrosion Services decided to build an additional factory in Montrose to handle their greatly increased business, they again contacted Kerr Compressor Engineers. The new site is large and assessment of the projected volume of grit-blasting and spray painting at Montrose suggested that an appreciably greater volume of compressed air would be needed than at Stonehaven.

The Kerr Compressor Engineers' team calculated that an installation of two new HPC Plusair DSD direct coupled screw compressors would cover all current and projected needs. They designed a system which includes as a standby one of the older screw compressors from Stonehaven and has a large compressed air dryer and a set of filters to ensure that the grit blaster and the sprayguns receive clean, dry air.

The base load compressor is an HPC Plusair DSD201, which delivers 568cfm 16.1m3/min) at 10 bar from 110kW. Operating in cascade with this unit under an HPC MAC41 programmable microprocessor controller is an HPC Plusair DSD 141 capable of delivering 380cfm (10.78 m3/min) at 10 bar. The Plusair DSD compressors each have their own PC-based Sigma control unit, an intelligent control and communication system which optimises energy efficiency while significantly increasing operational reliability.

According to HPC, its HPC DSD compressors wear less, use less electricity and cost less to maintain because the drive motor and the "airend" are designed to operate at the same low speed, making it possible for the drive and compression units to be directly coupled with no transmission losses. Noise and vibration are also said to be reduced.

The largest user of compressed air on the Montrose site is the Airblast Autoblast grit-blasting machine, into which 65ft long 21in. bore sections of pipeline are fed on a roller conveyor, emerging at the other end free of corrosion and fouling. This machine uses 600cfm of compressed air, which has to be extremely dry and free of oil if the grit is to be effective.

The fact that HPC Plusair compressors deliver air which is claimed to be almost oil-free as it leaves the compressor is a major benefit in this application, since the filtration system has little oil to remove and therefore does not need frequent maintenance.

The quality of the compressed air is also vitally important to the effectiveness of the anti-corrosion paint or metal finish which is applied to the pipes after blasting. Any oil or moisture present in the compressed air would result in poor finish which could easily be penetrated by seawater to produce chemical attack. Kerr Compressor Engineers has therefore provided a new drier and condensate management system for the Montrose site.

"This installation has operated without fault since it was installed", said Ian Kerr. "We find that HPC Plusair DSD compressors deliver total reliability and exceptional value for money, with lower running and maintenance costs and the additional benefit of quietness."