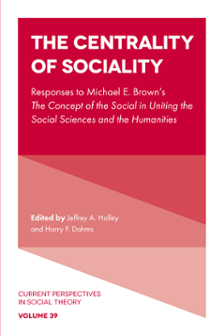 The Centrality of Sociality

The Centrality of Sociality: Responses to Michael E. Brown's The Concept of the Social in Uniting the Social Sciences and the Humanities

The University of Texas at San Antonio, USA

The University of Tennessee, USA

Jeffrey Halley dedicates this book to his wife and love, Jeanne Halley, October 7, 1944–July 28, 2022, in remembrance of her encouragement, critical comments, and devotion during their life together.

Michael E. Brown is Professor Emeritus at Queens College of CUNY, and Northeastern University. Among his books are the following: Collective Behavior (with Amy Goldin) The Production of Society, The Historiography of Communism, and The Concept of the Social in Uniting the Humanities and the Social Sciences.

Harry F. Dahms is Professor of Sociology, Co-director of the Center for the Study of Social Justice, and Co-chair of the Committee of Social Theory at The University of Tennessee–Knoxville, Director of the International Social Theory Consortium, and Editor of Current Perspectives in Social Theory. He is the author of The Vitality of Critical Theory (2011) and editor and coeditor of several volumes and special issues of journals. Among his current projects are Modern Society as Artifice: Critical Theory and the Logic of Capital (Routledge) and a volume in this series on planetary sociology.

Allen Dunn is Professor of English at the University of Tennessee. With Alan Singer, he edited Literary Aesthetics: A Reader, and with Tom Haddox, The Limits of Literary History. Some of his most recent articles have appeared in The Wallace Stevens Journal and Criticism After Critique, edited by Jeffrey Di Leo.

Jean-Louis Fabiani is Professor of Sociology at Central European University (Vienna) and Director of its Center of Religious Studies. He is the author of Pierre Bourdieu: A Heroic Structuralism (Boston/Leyden, Brill, 2021).

Jeffrey A. Halley is Professor Emeritus at The University of Texas at San Antonio and Editor, with Daglind Sonolet, of Bourdieu in Question: New Directions in French Sociology of Art. Leiden/Boston: Brill. 2017; with Ilaria Riccioni, “Performance as Social Resistance: Pussy Riot as a Feminist Avant-garde,” Theory, Culture & Society, 38(7–8) 2021.

Peter K. Manning is Senior Fellow at The Garfinkel Archive. He previously held the Brooks Chair in the College of Criminal Justice, Northeastern University, Boston, MA. His research interests include the rationalizing and interplay of private and public policing, democratic policing, crime mapping, crime analysis, information technology, and qualitative methods.

Michael W. Raphael specializes in cognitive sociology at the City University of New York. His work focuses on how cognition and interaction sustain social ordering. His primary research interest is in the context of human and machine problem-solving in organizational settings and its binding of interaction and structure. He pursues this interest in the context of legal decision-making and its interplay with the overall division of labor. Raphael’s research is featured in Visual Studies, the Culture & Cognition Network, and Oxford University Press.

Ilaria Riccioni is a tenured researcher of Sociology at the Free University of Bolzano-Bozen, Italy. Recent publications include Riccioni I. (ed.), Theater(s) and Public Sphere in a Global and Digital Society. Vols. 1–2 (Brill, 2022); Riccioni I., Futurism: Anticipating Postmodernism. A Sociological Essay on Avant-Garde Art and Society (Mimesis International 2019).

Daglind E. Sonolet has a PhD in History of Philosophy, University of Paris X, and in German History of Ideas, Sorbonne, Paris I. Her books include Günther Anders: phénoménologue de la technique (Presses Universitaires de Bordeaux, 2006), and with Jeffrey A. Halley, Bourdieu in Question: New Directions in French Sociology of Art (Brill, 2017).

Michael J. Thompson is Professor of Political Theory at William Paterson University. His most recent books include The Domestication of Critical Theory (2016), The Specter of Babel: A Reconstruction of Political Judgment (2020), Twilight of the Self: The Decline of the Individual in Late Capitalism (2022), and Descent of the Dialectic: Critical Reason in an Age of Nihilism (2023).

Immanence and internal relations are important concepts for this book. The people who made this book possible are mostly imminent to it as active participants. Of the two coeditors, Jeffrey A. Halley conceived the idea of a book as a response to a number of the key points raised in The Concept of the Social, and Harry F. Dahms facilitated two sessions in which Brown's book was discussed, at The Southern Sociological Society 2019 meeting in Atlanta and at the International Theory Consortium Conference in June 2021. We want to acknowledge the effervescence and interest by the participants that was created at these events.

Halley thanks the Department of Sociology and the College for Health, Community and Policy of The University of Texas at San Antonio for supportive working conditions, and Myra Haverda and Timothy Perez for their assistance in preparation of some of the chapters.

In the name of both coeditors for this volume, Harry F. Dahms would like to take this opportunity to thank Katy Mathers, Lydia Cutmore, Joshi Monica Jerome and Shanmathi Priya Sampath, for their enthusiastic, untiring support for Current Perspectives in Social Theory, and for seeing through this volume to its successful completion and publication. The series editor keeps being impressed, encouraged, and highly motivated to see their efforts being reflected in the quality of the work being published, and is thrilled to work with such an excellent, competent, and inspired editorial team!

Prelims
Introduction: What Is Distinctively Human About Human Affairs?
Consciousness and Crisis Today: Durkheim, Marx, Spinoza and Revolutionary vs. Reactionary Spirit
The Uncertainties of the Social
Brown on Sociality and the Social
Brown's “Course of Activity”: Non-Repeatability, the Avant-Garde, and Temporality
The Concept of Sociality in the Literary Criticism of Georg Lukács, Lucien Goldmann, and Theodor W. Adorno
In Defense of “the Social”: Convergences and Divergences Between the Humanities and Social Sciences in the United States
The Ontology of the Social as a Theory of Social Forms
Other Voices: The Concept of Heteroglossia in Michael Brown's Concept of the Social
Conceptual Implications in Social Sciences for Inquiring into the Social. Insights from Michael E. Brown's The Concept of the Social in Uniting the Social Sciences and Humanities
Theorizing, Bounded Rationality, and Expertise: Cognitive Sociology and the Quasi-Realism of Problem-Solving as a Course of Activity
Response: What Is Distinctively Human About Human Affairs: Sociality and the Question of Society
Index