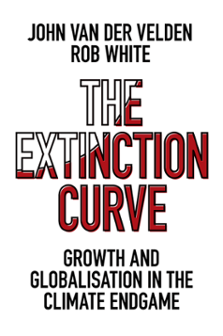 Growth and Globalisation in the Climate Endgame

John van der Velden is an independent socialist writer living in Canberra, Australia. He was a national convenor, on behalf of the Non-Aligned Caucus, in the initial multi-party Socialist Alliance. He writes on matters of political economy, class structure and the climate emergency.

Rob White is Distinguished Professor of Criminology at the University of Tasmania, Australia. Considered a pioneer in the field of green criminology, he has particular interest in transnational environmental crime and eco-justice. Related books include Crimes Against Nature (2008), Transnational Environmental Crime (2011), Environmental Harm (2013) and Climate Change Criminology (2018).

We acknowledge the Aboriginal and Torres Strait Islander peoples as the true custodians of the lands on which we live and work. The sovereignty of the more than 250 First Nations in 1788 has never been ceded. European invasion came with massive destruction of natural ecosystems, the widespread disruption of traditional caring for the country, and deliberate fracturing of deep spiritual connections between the First Peoples and their lands since the Creation Time. But the over 60,000 year organic cultural bonds with country are not severed and First Peoples resolve is unbowed. Demands for Treaty recognition of Indigenous sovereignty, custodianship, land rights and compensation on just terms remain unfulfilled. Their struggle against dispossession, colonisation and genocide and for self determination continues. It’s an inspiration of resilience for us all.

We are grateful to a number of people for their advice, suggestions and feedback in the preparation of this book. Our sincere respect and thanks to Ngunnawal Elder Roslyn Brown for her guidance on the First Nations statement. Alastair Greig provided valuable early collaboration on material in chapter 2 and an insightful and considered assessment of the final manuscript. His input and friendship over the years is gratefully acknowledged. We are also particularly thankful to Lesley Hayes, who generously read the manuscript at multiple points and kept the drafting grounded in the political universe of the audience for which it is intended. Alyson and Michael Kakakios provided much appreciated and valued insights and encouragement, as did Stephen Richer, Janine Smith and Frances Medlock. Will Steffen provided guidance on the climate science, trends and issues for which we are likewise appreciative. The shortcomings are ours.

A big thanks as well goes to Jules Willan and the team at Emerald for their enthusiastic support for this project.

This book is dedicated to our grandchildren: Riley, Blake, Paige and Clayton (John) and Luca and Lola (Rob). We wish they were inheriting a better world than the one we stumbled into. Hopefully, they will find the wisdom and resolve to make a positive difference for their families and communities.