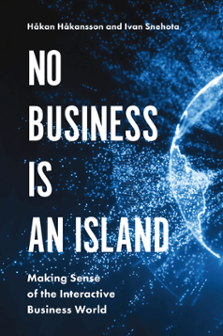 NO BUSINESS IS AN ISLAND: MAKING SENSE OF THE INTERACTIVE BUSINESS WORLD

NO BUSINESS IS AN ISLAND: MAKING SENSE OF THE INTERACTIVE BUSINESS WORLD

Half a dozen junior researchers from different countries, with an interest in business-to-business markets, met in Uppsala in 1976 to discuss an international research project on International Marketing and Purchasing (IMP) of industrial goods. The meeting and the project that followed became the starting point and first phase in the development of a research tradition that has now gone on for some 40 years. This development has seen the involvement of more than 1,000 researchers from all continents, resulted in more than 200 PhD dissertations, dozens of books, hundreds of academic articles and 3,000 papers, presented at more than 30 annual international conferences (the last of which took place in Poznan in 2016 when this was written).

The IMP research tradition generally became credited for pioneering the concepts of business relationships, business networks and interaction, and was recognised as highly influential, not only in the field of research on marketing and purchasing in business markets (e.g. Vargo & Lusch, 2008), but also in research on innovation and economic policy. Over the past two decades, several attempts have been made to summarise and relate different research fields in the IMP research tradition to each other and to position the IMP tradition in the broader field of management research (Ford & Håkansson, 2006a, 2006b; Håkansson, Ford, Gadde, Snehota, & Waluszewski, 2009; Håkansson, Harrison, & Waluszewski, 2004; Håkansson & Snehota, 2000; Wilkinson, 2008). A weakness of these attempts to sum up the development of the IMP research is that they have been based on the initiatives of a few researchers and consequently have fallen short of providing a more comprehensive and collective overview of the various achievements in the field and the implications for management research and practice.

Given the past record, richness and variety of the IMP research, we felt it was now time to bring together and systematically relate various development paths in the IMP research and to integrate the different research fields into more solid blocks. The aim of this endeavour is to advance the conceptual development of the findings for further research and practice and, in particular, to articulate its implications. This task involved mobilising a broader group of researchers that are, or have been, related in different ways to the IMP research and have influenced the directions in which the IMP research has developed and who are also likely to affect its future development. Summarising and elaborating on 40 years of IMP research, discussing its achievements and outlining the implications required an organising process. The aim has been to create a collective output from a large number of influential researchers in the IMP community who are jointly producing some significant publications.

The overall ambition, shared with all authors, has been to:

The process that has led to producing this volume started in 2013, and the organisation was accomplished in four steps:

Step 1: Constituting the Advisory Board – Defining the themes

In the first step a set of researchers, with diverse backgrounds in experience, country origin and gender, was enlisted to act as an ‘advisory board’ for the project. This board was engaged in formulating the three themes indicated in the title of the Symposium – IMP research and its implications in three different areas – research development, management and policy. The advisory board was constituted in the fall of 2013 and consisted of 13 researchers, including two project leaders:

Six of the researchers on the advisory board are senior members with solid experience of past IMP research, while the other five represent more junior members of the IMP community committed to, and involved in, contemporary development and future expectations. All board members have been involved in organising IMP conferences or IMP journal seminars.

Research in the IMP tradition has produced a ‘network perspective’ that has turned out to be fruitful, not only for developing effective conceptual frameworks for analysis of industrial marketing and purchasing issues but also for advancing the development of conceptual frameworks in other fields such as innovation and economic policy. At the same time, the empirical research carried out in the IMP research tradition and the main findings have some significant methodological implications. On various occasions, it has been pointed out (e.g. Håkansson et al. 2009) that IMP research has implications beyond the original field of marketing and purchasing.

The findings and conceptual development resulting from the IMP research appears to have had implications in three particular areas: management practice, economic policy and research and theory development. Therefore, in the second step, three workshops were developed on the topic of implications of the IMP research in three areas: management practice, economic policy and further theory development and research. These became the themes of the three workshops.

Researchers belonging to the broad IMP community were invited to submit papers on each of the three topics. Every workshop consisted of about 20–25 papers the advisory board selected and reviewed. Each paper was assigned two discussants. The titles of the relevant papers discussed during the workshops are listed below, together with the dates and venues for each workshop.

The final event took place as a symposium held between 31 May and 2 June 2016, in Uppsala. The symposium was organised at Uppsala University (in collaboration with the Centre for Science, Technology and Society) and brought together 60 researchers, all of whom have been involved in the development of IMP research in different ways, including the three workshops. Two types of papers were submitted and discussed. First under discussion at the workshops were previously presented revised papers, written as articles for publication; second were outlines of papers that would be successively developed into chapters in the planned book based on the symposium. (The full programme for the symposium can be found in Appendix A.)

The workshops and the symposium resulted in two different types of publications. Most of the papers presented in the three workshops have been developed into published articles. Up to the present, some 47 articles have been accepted for publication. A list of the published papers is provided in Appendix B. Based on these articles and the discussions in the workshops and at the symposium, 13 themes were identified, developed and discussed with potential authors. This process resulted in the mobilisation of 25 authors who, in different constellations, have authored chapters on the 13 themes. Each chapter went through at least two review rounds after being discussed with the editors. We hope that the resulting book will be as interesting to read as it has been for us to produce. Thank you all for making this special journey so fruitful for us.

We also would like to take this opportunity to thank all the IMP researchers with whom we have been interacting for over 40 years. It has been a lifetime experience of intensive interaction that has involved tough disputes, creative exchanges and thought-provoking seminars. It has been a very rich life that has included a lot of blood, sweat and tears. We hope this volume will show some results of all these hours of hard work.