Guaranteeing the safety and stability of railway track when transporting passengers or goods is critical these days. The increased loading of the rail network and the higher speeds of modern trains lead to higher stressing of the rails. The track itself is, therefore, the most important safety aspect and so needs to be inspected regularly to prevent any accidents.

The latest non-contact, laser-based profile measurement sensors from Micro-Epsilon are being used by several leading rail inspection companies around the world (Figure 2). Infotrans, for example, a leading supplier of inspection systems and services to Russia's sole railway network company “Russichen Eisen Bahn” is using Micro-Epsilon sensors on a newly-developed wagon inspection system to measure and monitor for wear on the track. This ensures improved safety and reliability, but is helping the customer significantly reduce maintenance and downtime costs. Nine Micro-Epsilon ScanCONTROL “LLT 2800-100 (205)” sensors are being used in the application.

The wear of the rail head itself is clearly an important safety parameter in assessing overall reliability of the track and condition of the rails. If the wear is too high, this can potentially lead to train derailment. Conventional inspection methods are based on manual inspection or, more recently, light-section sensors. However, the manual method is fraught with difficulties: it is slow, inaccurate and, therefore, inefficient for track inspection teams. Before purchasing Micro-Epsilon sensors 12 months ago, wear on the rail head was monitored manually by teams of engineers.

Scanning the track with laser sensors (or light-section sensors) has been available for some time now, but extensive tests have shown that the sensors are too slow and also have problems coping with the different reflective properties of the tracks, which are often made from shiny, metallic materials that have become corroded in places. In addition, the resolution of the laser sensor needs to be very high so that the required number of measurements can be taken as the inspection train moves along the track.

The LLT 2800-100 (205) sensors are unaffected by shiny, metallic rails. It has an integrated, highly-sensitive CMOS array, which enables measurements of almost any shiny, reflective or transparent surface, independent of the reflection from the target. This means excellent accuracy, resolution and reliability are achieved, even at high measurement speeds. A line optical system projects a laser line onto the surface of the rail. The back scattered light from the laser line is registered on the CMOS matrix by a high quality optical system. Along with distance information (z-axis), the controller also calculates the true position along the laser line (x-axis) from the camera image and outputs both values in the sensor's 2D coordinate system (Figure 3). A moving target or a traversing sensor generates a 3D representation of the object being measured. 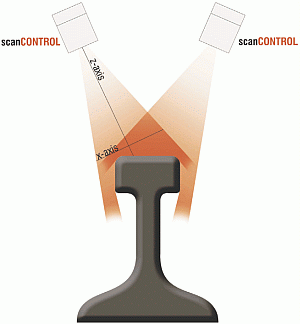 Chris Jones, Managing Director at Micro-Epsilon (UK) comments: “The sensor Infotrans is using is designed for train speeds of between 120 and 130km/h. Infotrans selected Micro- Epsilon sensors because we were willing and able to customise the product to suit the application. The standard sensor has a 15mW laser, but we increased this to 50mW for Infotrans. We also changed the focal distance of the sensor and the profile frequency [speed] from the standard 1kHz, which measures 1,000 profiles each second, to 4kHz, which means Infotrans can measure up to 4,000 profiles per second.”

According to Jones, Infotrans was particularly impressed with the compact dimensions of the sensor, Micro- Epsilon's capability to modify the standard sensor to suit the application, and the interface from the sensor to the customer's PC-based measurement and data management system.

Jones continues: “Since, we sold the sensors to Infotrans, feedback from the customer has been very good. There have been no problems with the sensors and the customer is currently conducting more field tests. We are hopeful that series production of the inspection wagons will begin shortly, with around 50-60 of our sensors being required.”

Micro-Epsilon sensors are not only being used to measure wear on the rail head. A major rail company in Germany is also using the sensors on a test rig to measure the profile of steel tyres on its trains. The steel tyres are subjected to continuous extreme loads and wear on the wheels due to high mileage, also affects the safety and ride characteristics of the train.

A novel, custom-built test rig has been developed which is located in the track bed. This measures the profile sets of a complete train. Point and linear, laser-based optical sensors are being used to measure the profile. By using the latest tyre profile measurement sensors from Micro-Epsilon, which acquire and store the profile data, the costs in terms of time and labour have been significantly reduced. Using application-specific software, the profile data – which forms the basis for the maintenance team to determine the date for re-profiling work – can be inspected to find out if limits have been exceeded.

The test rig consists of two measuring beams, which provide guidance for the train in the track. The complete measurement system is housed in three troughs embedded in the track bed transversely to the direction of travel. In each of the outer troughs, there are two, Micro-Epsilon “optoNCDT 1810 (50)” point laser sensors which acquire the wheel diameter and the position of the steel tyre. The inner trough accommodates two, Micro-Epsilon “scanCONTROL 2800” profile laser sensors which acquire the wheel profile. In addition, two sensors are used to acquire the direction of travel and speed of the rail vehicle. To facilitate measurement, the rails have recesses.

The profile sensors project a laser line transversely onto the wheel surface, which is located transversely to the direction of the track. A high quality optical system concentrates the diffuse reflected light from this laser line onto a CMOS matrix. In the sensor controller, the transverse profile of the steel tyre is then output from the camera image.

The Micro-Epsilon sensors are weather-resistant and operate to an accuracy of 0.1mm.

Aside from rail track inspection, Micro- Epsilon's scanCONTROL 2800™ sensors are being used to measure contours, to guide robots, to align gaps in doors, for position measurement, groove measurement, co-planarity and flatness measurement in a variety of R&D, test, inspection, quality control and manufacturing environments.