Online inspection of the popular Harley Davidson V-Rod motor cycle engines has thrown up many challenges due to difficulties in access and the need for the highest precision. The solution has been found in a smart camera vision system from DVT Corporation linked to the Allen-Bradley PLC. line controllers used throughout the plant.

Assembly of the V-Rod bikes, some of which are limited editions that include special 100th Anniversary emblems, are built on four lines at the 33,000 m2 Kansas City assembly plant, which employs some 930 people. Two of the lines are dedicated to V-Rod assembly, one to assembly of the 115-hp, 1,130 cc Revolution engine, which was developed in a joint venture with Porsche, and the fourth to final assembly. All the four lines use SLC 5/03 Allen-Bradley PLCs from Rockwell Automation, who like Harley has recently celebrated its 100th anniversary.

While the PLC. controller for the engine assembly line has been in operation, since production of V-Rod engines started in 2001, the inspection system using the DVT 530 SmartImage camera has been running since February 2003. Its function is to verify the presence of the bearing and balance shaft and correctness of the snap ring seating in the engine transmission block and “report” to the Allen-Bradley PLC. (Plates 2 and 3).

When System Integrator Chris Davison of Bachelor Controls, an authorised Rockwell solutions provider, received a call from Terry Carson of the DVT distributor company power motion sales, he knew that this application would be more challenging than the existing snap ring inspection in place on the V-Rod line. For that inspection, the engine part was positioned on the line in a manner which allowed easy access for the DVT camera. The new inspection, however, involved an engine block in a different position on the line that created a working area too tight even for the 112 x 60 x 30 mm size of the DVT camera. 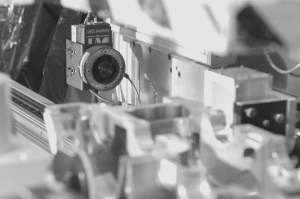 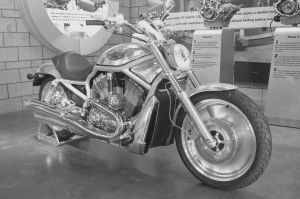 “When I first learned of this project, I knew it would require more creativity and resourcefulness than a standard application”, Davison said. “This kind of challenge is exciting to me because it can potentially open doors for other applications.”

Bachelor Controls worked with Harley- Davidson Manufacturing Engineer Dan Bruyn to come up with an innovative solution, in which the camera is attached to a servo-controlled linear actuator. The actuator is connected to a pneumatic slide that indexes the camera to three different positions and inspects three identical snap rings in different locations on the transmission block. The inspection procedure involves the camera moving from the home position to the first inspection point, moving back to the home position, and then back to inspection point number two and then to point three, each time returning to the home position. This inspection procedure is performed simultaneously with the assembly of 20 internal engine parts that occurs at that place on the line. Hence, no line time is lost to the inspection process, a prerequisite of the solution.

Since the camera cannot be positioned close enough to the inspection area, a mirror is fixed at a static position on the pneumatic slide to allow the camera to capture images. The position of the mirror has to be situated at an exact angle for the camera to take precise measurements.

Once the pneumatic slide, camera and mirror assembly were complete, another challenge presented itself. The position of two of the snap rings created lighting issues such that the camera could not verify the seating of these rings – there was no problem when inspecting the bearing and balance shaft and the third snap ring.

After extensive use of the DVT Framework “blob” tool and associated software filters, Bachelor Controls and Bruyn devised an inspection process with total repeatability that sufficiently addressed all lighting and image issues. By using the software filters, compensation could be made for the lighting conditions and other issues to a degree where the captured images of the two ring seatings were of a sufficiently high quality to reliably provide all the required data.

Another challenge for the application was identifying a location to be used as a reference point for camera measurements. The snap ring is in the shape of an incomplete circle with two holes close to the gap. The first thought was to use the two holes to establish a fixed location. Instead, Bruyn and Bachelor Controls decided to use the gap in the ring as a reference point and inspect for the two edges on the gap of the ring.

Once the gap was located, a heavy amount of scripting was required to move the location of multiple line gauges. This involved transferring of a spherical coordinate system to a Cartesian coordinate system, to offset the lines to ensure that they would hit the snap ring edges in the correct locations.

Using the DVT Emulator tool, which permits the users to work on applications off-line, the two engineers viewed hundreds of logged images of the application without having to wait for images to come up in the actual process. “The emulator tool helped immensely because it meant, we didn't have to baby-sit the line as it cycled through. This sped up the process dramatically,” Davison said.

Once the machine vision unit was set-up, Bachelor Controls added a remote I/O module to the PLC. to communicate to a new remote I/O Flex rack. Two power supplies were added – one for the Flex I/O and the other for the DVT equipment. All digital I/Os were connected to the DVT breakout board, whose I/O was connected to the new Flex I/O for station sequencing.

“This PLC. expansion was a straightforward integration with no major challenges and it has worked flawlessly”, says Bruyn. “Bachelor Controls built a new panel with the DVT I/O board connected to the new Flex I/O and provided the programming for the linear actuator, pneumatic slide, DVT communications and miscellaneous I/O through this Flex I/O”.