A unique high specification valve designed and produced by Norgren will be at the heart of an important space science mission designed to push forward the quest for knowledge of the stars and planets.

The space observatory mission is being undertaken by the European Space Agency (ESA) and is due for launch in 2007. One of its tasks will be to measure minute levels of infra-red radiation emitted by distant stars and planets, giving new insights into the history, composition and eventual fate of star systems and galaxies (see Plate 1). 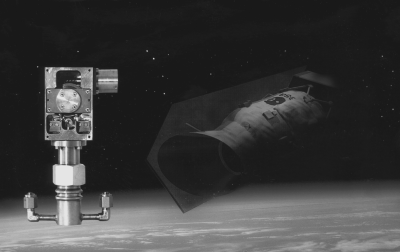 The satellite will carry an array of hypersensitive radiation sensors to be deployed and aligned ready for their data-gathering role. During operation it is vitally important to eliminate as much of the sensor's self-produced radiation as possible. This is to avoid drowning out the tiny levels received from space. To achieve this the sensors need to be kept at an astonishingly low operating temperature of between 1-2K (a temperature on the threshold of absolute zero). The sensor's coolant is liquid helium pumped, and continuously controlled, through the special valve to space.

ESA's strict specifications required a precision control valve that could operate with liquid helium in the extreme temperatures and vacuum of space. The valve must be able to remain pressure tight during the preparation, launch and deployment operations. There must be an almost zero loss or leakage of the vital liquid helium cargo. Any loss of coolant will result in a reduction of valuable operational time and amount of data gathered. The valve must have the minimum mass necessary and low power consumption to help keep the total payload low. Above all the valve must be 100 per cent reliable. A failed valve would be a failed mission.

ESA's demanding requirements provided an opportunity for Norgren to demonstrate its ability to provide tailored solutions for the most complex projects. The research and development was carried out at Norgren's valve division headquarters in Fellbach, near Stuttgart, Germany. This was formerly the main site of Herion, which joined the Norgren Group in October 1997.

Using their combined technical expertise, Norgren engineers developed a completely new purpose-designed valve prototype. This has been successfully tested under extreme and exacting conditions. The resulting custom design is based on a motorised valve with a precision metal to metal seat arrangement of special geometric design. Particular attention was paid to keeping the valve operating force low, thereby lowering the power required from the motor actuator. A solenoid design was rejected at the outset as the power consumption would have been too high and increased the mass of the power supply plant.

Dr Ehrenfried Dittrich, Norgren's cryogenics specialist, said, "Our technical expertise has been tested to an absolute limit with the most demanding of applications – in outer space.

"We had to fulfil very special requirements in the use of cryostats to cool highly sensitive instrumentation and it was essential that very low leakage rates were achieved to make the most efficient use of the stored helium, thereby maximising the mission's duration in space.

"Other strict requirements included a restricted power budget, wear resistance (no plastics), weight and dimensions, as well as leak-tightness under high acceleration loads.

"Another essential requisite was absolute functional reliability as once the mission is in space there won't be any opportunity to service or repair the component."

Norgren worked on behalf of LINDE, specialists in liquid helium equipment and ETEL, who developed the motor operated actuator.