Increasing automation, coupled with the emergence of new applications, to provide stimulus for growth in auto ID equipment

Increasing automation, coupled with the emergence of new applications, to provide stimulus for growth in auto ID equipment

Although all of the product segments comprising the automatic ID equipment industry are currently undergoing a period of growth, they are all at different stages of their life cycle, ranging from infancy to maturity. Nevertheless, concludes a new study by Frost & Sullivan, the international marketing consulting company, the automatic ID industry is poised for strong revenue growth up to and beyond the end of the millennium.

According to Edward West, research analyst at Frost & Sullivan, the technologically highly diversified European automatic identification equipment market is entering a period of exciting growth prospects, with revenues rising at a compound annual growth rate of 18.8 per cent between the years 1997 and 2004, from a value of US$1.36 billion to US$4.54 billion.

"End-users tend to be unaware of the full range of benefits that auto ID equipment can provide. However, as end-user acceptance increases and successes of this technology become more commonly known, the market will experience positive growth", Edward West continues.

The overall auto ID market in Europe has primarily been driven by a general need for increased automation, partly due to the high cost of labour prevalent in Europe, in addition to the mushrooming number of applications for automatic ID technology and the inherent advantages of using automatic identification equipment. Furthermore, increased end-user awareness of auto ID products has led to market expansion, as has the maturity of some of the auto ID-associated technologies.

Many products within the barcode equipment market, leading the field in terms of auto ID product segments, have the same features and provide the same functionality.

New product developments are driving market expansion and provide end-users with a broader spectrum of choice, moving the market along at a faster pace.

The development of barcode technology is likely to continue to gain pace and to increase revenues from US$654.0 million in 1997 to US$1.84 billion by 2004.

In terms of market players, Symbol Technologies heads the overall auto ID equipment market. This dominance can be attributed to the company's leading position in the barcode market, which is the largest segment in the overall auto ID equipment market. Symbol's extensive distribution market and product range are mainly responsible for the company's success.

Frost & Sullivan's study identifies a growing trend towards more complicated and functional technologies. Within the card readers market, for example, magnetic stripe is losing out in favour of smart card technologies. Furthermore, RFID (radio frequency identification) is rising in popularity at the expense of barcode equipment.

Meanwhile, growth in the European card reader market is expected to be fueled by emerging applications for smart cards, the need for increased security which drives smart and optical card markets as well as smart card standardisation across key applications and the low cost of magnetic stripe technology (see Figure 5). 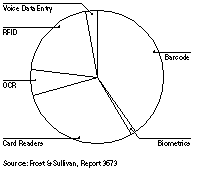 Ranking in third position is the RFID sector. Growing end-user knowledge and awareness, coupled with transponder price reductions and the development of standards are expected to be responsible for the exponential growth forecast to typify the RFID market, growing at a compound average growth rate of 34.7 per cent between 1997 and 2004.

The study continues: "Biometric systems, especially in the field of fingerprint scan, are poised to enjoy great success rates as the present gap between maturity of some of the technologies and the general lack of use of biometrics is narrowed. As prices fall and acceptance increases, biometrics technology should become commonly used in the future. Biometrics technology introduces issues of end-user acceptance and civil liberties concerns."

Germany, France and the UK represented the three largest national markets in 1997 and are predicted to remain in this dominant position. Meanwhile, other regions are forecast to gain in importance. The early adopters of auto ID equipment become less significant as the markets in other European regions begin to take off.

Frost & Sullivan's study concludes: "Enhanced performance is closely linked to improved technology. However, higher functionality must come at a cost-effective price; high prices are one of the most important factors restraining some sectors of the overall auto ID equipment market."