What are the prospects for mobile virtual network operators (MVNOs) and discount mobile service providers (DMSPs)?

What are the prospects for mobile virtual network operators (MVNOs) and discount mobile service providers (DMSPs)?

We have already noted that MVNOs already exist in relation to 2G – there are roughly 50 of one kind or another in Western Europe – and that they are likely to be a feature on the 3G landscape. However, care is needed because there is no universally accepted definition of an MVNO. A relatively rigorous view would require an MVNO to own a mobile switching centre, possess a unique mobile network code, issue its own branded subscriber identity module (SIM) cards and operate a pricing structure significantly different from that of the owner of the network over which it provides its services. What it does not control are masts, base stations and frequencies. While a company such as Virgin Mobile appears to fit these requirements reasonably well, it is argued that it is strictly speaking tied too closely to T-Mobile in the UK – in effect, it has formed a joint venture and the equipment is in reality all provided by T-Mobile. Swedish-based Tele2 is arguably the best example of an MVNO in Western Europe because it does provide its own switches. Its strategy is to operate either as a mobile licensee – it has an interest in a couple of 3G licences – or, more commonly, an MVNO in all countries where it provides fixed services. As well as its existing MVNO operations in Denmark, Germany and The Netherlands, it has plans to move into Austria, France, Ireland, Switzerland and, eventually, Spain. As for most others, these are little more than basic resellers of other operators’ services.

The central issue, unsurprisingly, is that once a prospective MVNO moves beyond the reseller model, it must start laying out appreciable sums for equipment installation and this leaves little latitude for decent profits. Since incumbents are aware of this, they take advantage by selecting virtual service providers to suit their own objectives and by keeping margins down to a minimum. It is possible to choose a middle path between true MVNO and reseller, along the lines of Tele1 Europe, by becoming an enhanced service provider (ESP) – eschewing ownership of switches but possessing a billing, intelligent network and voicemail system, and a unified messaging platform.

Because a number of companies which either failed to obtain 3G licences or diplomatically declined to bid will want to become MVNOs, the licensees will have the upper hand in negotiations. However, this needs to be tempered by the knowledge that the spectrum was often so costly that it must be fully utilised as soon as possible, in which respect MVNOs may well prove useful. Certainly, some MVNOs, in the guise of enhanced service providers, will have marketing skills that are in short supply among traditional mobile network operators. What will happen when the latter rush out to acquire such skills, and hence come into direct competition with their related MVNOs, is another matter. In the mean time, there is an inevitable snowball effect once the first MVNO appears since it is better to accept an MVNO on a network, with its attendant payments, than have it attached to another network, thereby increasing competition.

Some 3G licensing conditions expressly authorise the role of MVNOs without necessarily specifying what the latter are. However, as potential bidders in Hong Kong have pointed out, if MVNOs are permitted to bid for a share of the spectrum obtained by each licensee, they could end up with more spectrum in aggregate than the licensees themselves. In the EU, licensing conditions have generally had nothing explicit to say about the role of MVNOs, although the “beauty contest” in Ireland provided additional spectrum for the winner of the “A” licence if it agreed to allow an MVNO to use its network.

Prospects for MVNOs in the USA are generally thought to be poor. So far, Virgin Mobile USA is the only operator with a successful track record of MVNO operations to throw its hat into the ring, commencing in June 2002, although Qwest also now has an operation using the same Sprint PCS network and there is a Nextel joint venture trading as Boost Mobile which does not own its own infrastructure. According to Pyramid Research, Virgin Mobile will only survive if it achieves SACs of under $200, an annual churn rate of under 20 per cent and a monthly ARPU in excess of $60. Furthermore, even if it is initially successful, this will simply serve to impose capacity constraints on its partner, Sprint PCS. By March 2004, Virgin Mobile USA had acquired 1.75 million subscribers, which technically made it the tenth largest US mobile operator, and it will be interesting to see how it develops now that it has a firm foothold in the market.

Prospects in Asia are arguably worse. The failures of the Virgin Mobile/SingTel venture in Singapore and the Shell Mobile venture in Hong Kong suggest that a number of factors, such as high churn rates and number portability, have to be highly positive to offer much for prospective MVNOs, although it helps in principle if the regulator has made specific provision for MVNOs and network sharing when drawing up the rules for 3G licences.

In recent times, attention has switched somewhat, at least in Europe, to a related concept called a discount mobile service operator (DMSP). Crucially, a DMSP may have no prior experience of the mobile telephony sector, but may be reliant upon brand recognition carried across from a different industry and an established widespread marketing footprint (especially if associated with Internet-based sales, since telephony can then be treated as an additional service available on the Web site). Such an operator is able to undercut incumbents by recourse to a lower cost structure, itself sustained by online-only sales channels – in simplistic terms a DMSP is an online MVNO or ESP. In essence, a DMSP concentrates only on voice calls and charges using a simplified tariff with perhaps only two prices. DMSPs are particularly prevalent for 2G in Denmark (see Table I), where Telmore and CBB Mobile have captured over 40 per cent of all new customers since their formation in 2000, but this is partly explained by the fact that a loophole in the regulations allows subscribers to unlock their terminals and use a DMSP for voice calls. Given that this loophole will be closed during 2004, the trend evident in Table I may not continue, and indeed may reverse itself. Clearly, although the larger incumbents are extremely unlikely to let a DMSP have access to their networks – unless, as in the case of TDC which acquired 80 per cent of Telmore in February 2004, they have a good reason to do so – smaller networks struggling to fill their capacity may be happy to do so, if only because there is probably some money to be made from the provision of billing and customer care services and a very small amount from carriage, and hence the appearance of DMSPs will anyway be governed by the balance between networks and the views of regulators. Needless to say, letting competitors provide cheap services over a struggling network may simply serve to drive it to the wall, or alternatively into the arms of one of the incumbents. 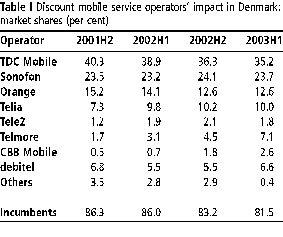 How much relevance this will have for 3G is as yet unclear since the model is voice-driven at this stage. However, if the Danish experience becomes at all widespread, the appearance of DMSPs will have a significant downwards impact on the prices of voice calls and SMS. For this reason, some analysts argue that the best tactic for incumbents is to offer off-the-shelf packages on which the purchaser simply needs to stick its corporate logo. This is hardly good news for incumbents, but as ever the bottom line is that if you don’t do it someone else almost certainly will.