The machine shop at British Nuclear Fuels Limited (BNFL) in Preston manufactures magnesium components for use in the UK's nuclear power stations. 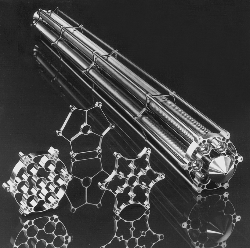 Production engineer David Ward says the section has traditionally experienced a sump life of eight weeks for the water-based coolant used to machine magnesium, as the material makes the normally soft water very hard, causing the coolant to separate and become more alkaline.

However, following a move to a new building and the installation of a centralised coolant distribution system, a new coolant Shell's Sitala E5202 was introduced, with spectacular results.

Explains David Ward: "We have seen an increase in coolant life from eight weeks to 14 months since changing to Shell Sitala. And because it does not separate and its pH level is constant, we are able to process it through the coolant system's filters and return it to the machines".

The self-contained coolant system feeds fresh Sitala to each machine on demand via overhead pipes. When machining is finished the swarf drops into a pumping station which chops it into small pieces and pumps it through another network of overhead pipes into the coolant station where filters separate the coolant from the swarf.

The swarf is then fed into a continuous centrifuge, where it is dried before being stored in drums to await disposal. The residual coolant is filtered again and returned to the system as clean Sitala.

David Ward concludes by saying that the extended coolant life has also resulted in significant cost savings for the CMP section. "Obviously we save on reduced coolant cost due to lower consumption, but we also benefit from much reduced machine downtime and increased productivity because we only need to renew coolant every 14 months", he says.