An attentive audience enjoyed a comprehensive update on the state-of-the art of laser direct imaging at a seminar kindly hosted by Shipley Europe in Coventry on 24 September 2003.

ICT Chairman Chris Wall introduced the two speakers: Kevin Smith, Orbotech's European Product Manager for LDI, and Jim Simpson, Senior Advanced Technology Engineer with Shipley, who presented a nicely-balanced programme representing the complementary viewpoints of equipment manufacturer and photoresist supplier (Plate 1). Each reported how their respective development teams had analysed the requirements and expectations of the printed circuit fabrication industry and set about building appropriate products. The benefits of positive communication and cooperation between the suppliers in achieving specified performance targets were plainly evident. 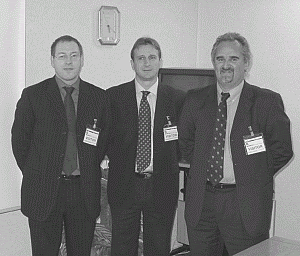 In his paper entitled "Technology requirements for high speed, cost effective laser direct imaging", Kevin Smith reviewed the history of LDI technology over the last decade, and described in comprehensive detail how various significant obstacles had been overcome to provide a system which offered genuine benefits in quality and cost-effectiveness.

In consultation with suppliers of photoresists, the decision had been taken to concentrate on a UV-based system. Solid-state UV lasers with 4 W power output, at wavelengths to suit photoinitiator chemistries, had recently become available, and these offered a more practicable and longer-life alternative to the argon gas lasers used earlier.

The optical system presented perhaps the greatest engineering challenge. Orbotech, working in collaboration with Jenoptic, had developed a telecentric lens which enabled the laser beam to be directed perpendicular to the table at any point over its width. The requirement to effectively perform 384 million switching operations per second had been achieved by splitting the beam into multiple channels and using acousto-optical modulation at 24 MHz.

Table movement was controlled by phi-axis and linear motors with closed loop feedback, and precise synchronisation between table motion, polygon rotation and modulator allowed table position to be determined in relation to laser beam position within 0.2 μm.

Kevin explained how the system aligned image data to target features on the panel, with the flexibility to recognise the whole range of target formats demanded by the market, how precise side-to-side registration was achieved, and the advantages of local and global image scaling.

The principal factors governing throughput were the available laser energy, data processing capacity and practicable mechanical speed. At the present state-of-the-art, registration and imaging operations could be completed within a 24 s cycle time at 4,000 dpi resolution, and the capability to process over a hundred 26 in. × 32 in. panel-sides per hour had been established. The additional production benefit was the greatly reduced set- up time, as compared with contact-printing processes.

But equipment development was only half of the story – the hardware needed to be complemented by the appropriate dry film photoresist to offer a practicable imaging solution for applications in printed circuit fabrication. Jim Simpson's paper, "Generic overview of laser direct imaging and chemistry" demonstrated how a supplier of consumables had addressed the challenges presented by the LDI concept.

Photo-speed had been a prime consideration. Current-generation contact-printing resists typically required exposure energy of around 35 mJ/cm2, and to use such materials in laser direct imaging applications would result in the process being unacceptably slow. Currently, products had been developed requiring as little as 12 mJ. Even faster materials were theoretically available, but were considered too sensitive for use in a production environment.

Although early versions had been adapted from the existing formulations, it had been found necessary to design a completely new range of application-specific materials to achieve optimal performance, particularly in terms of resolution, sidewall characteristic and surface quality. Photoinitiators had been developed with improved efficiency at the laser wavelength of 365 nm, with reduced sensitivity at longer wavelengths, and new phototropic dyes gave sharper contrast after exposure. Improvements in the characteristics of polyester cover film had contributed to enhanced surface and sidewall properties.

Great emphasis had been placed on the need to offer a drop-in system which would be compatible with the existing pre-treatment and develop-etch- strip and pattern-plating processes, and a full range of negative-working, aqueous-processing dry films with thicknesses of 30, 40 and 50 μm were available.

Because of the increased photo-speed and fine- resolution capabilities of these new resists, very efficient safelight and a high level of clean-room discipline were essential, together with good process control, to optimise their performance and to realise high yield figures.

In conclusion it was clear that, together, the suppliers of equipment and photoresist had delivered an imaging technology capable of fine features, high yields, precise registration and realistic throughput. Return-on-investment figures were favourable and LDI had made the transition from novelty to production reality; over 50 systems were in use worldwide, of which 22 in Europe, including six in the UK.