All or nothing: product control goes global or local

Front, back and sideways

The 2003 survey found a wide variety of organizational approaches to product control:

Despite the variety of organizational structures, there was relative unanimity on the "core" functions of product control and things which were definitely outside product control (see Figure 1 ). Ratios of product control staff to front-office staff ranged from 1:1 in areas such as derivatives to 1:20 for vanilla and exchange-traded products. Most organizations did not perform daily balance sheet calculations. Month-ends are a "bump" for product control, requiring extra staff overtime for periods extending from two to eight days, and typically with overtime of between two and five hours. Organizations had a variety of ways of handling 24 hour reporting, either living with different time zone data or systems of "flash" reports with later "finals" and variance explanations. A number of banks seemed to be trying to increase the skills of staff, e.g. bringing in more technical accounting expertise, while reducing the drudge through automation. 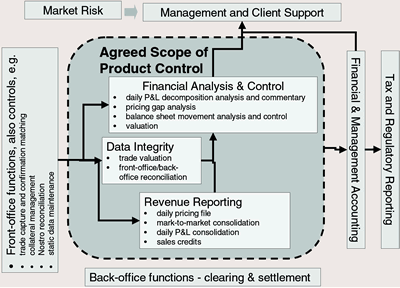 There seemed to be great interest in attempting to benchmark product control by some common numerators such as headcount or cost, if it were possible to agree on some common denominators, but there seemed to be problems with most suggestions for a denominator, e.g. cost or headcount per book, per P&L, per trader, per unit revenue, per transaction, per system interface or per legal entity? According to one interviewee "if you want to reduce headcount, then reduce the number of businesses you are in". Organizations did feel that they could reduce costs if they could automate P&L production and decomposition, otherwise most savings would be "merely better management". Re-engineering product control ultimately depends on automation.

Get a grip on the big picture details

The stepping-stones to successful product control appear to be:

Longer-term however, the structure of product control may be determined more by outsiders than management. In the future, regulatory trends indicate that product control is likely to be split decisively between the front-office support functions and imposed controls, typically those undertaken within risk management or internal audit. If this is the case, then the views of one interviewee ring true – "We don't see ourselves as trade support; our first and foremost role is as controllers; product control's decision is final". Whatever the final outcome, the message is that clarity matters – either product control is a global control function or it is a local trade support function. Where a clear decision is made, performance is enhanced.