Investment banking trading volumes are increasing rapidly while margins per transaction are falling. Clients are more sophisticated and more demanding. The link between commission and cost is breaking down as large buy-side clients break their business into smaller orders. At the same time, regulatory changes, new legislation, new technology, financial scandals and reputational risk all put pressure on investment banks. For volume players, the strategies are clear – efficiency, service, control. For all players, innovation in customer service, products and operations are essential. For marginal players with volumes below the efficiency threshold, and for all players unable to generate returns for shareholders, consolidation looms.

It actually looks as if investment banks might well reach zero marginal cost (ZMC). In a ZMC world, things change rapidly. A number of observers have pointed out that external costs, e.g. CLS charges, general clearing and settlement fees, exchanges, etc. mean that marginal costs will always be non-zero. So be it; call it zero marginal competitive cost (ZMCC); no one can process at a lower cost.

Bracing themselves for ZMCC, investment banks need to move from craftwork (handwerk) to functioning more like power plants (kraftwerk) or sausage machines. In many ways, intense cost pressure is a positive sign, a sign of an industry moving to the next level of maturity. However, the pressure does not stop there. The evolutionary progress from today's raw idea to tomorrow's boring, high-volume commodity product line has sped up. Products move from exotic to vanilla in a few years, not a decade. This puts more pressure on the client-facing side to provide innovative highly structured products in advance of the wave of commoditisation. It also puts pressure on operations and IT for bottom-up innovation that increases efficiency, service and control.

And the facts support this view of the world. Z/Yen regularly benchmarks investment bank costs, headcounts and volumes to produce costs per trade covering:

The following four graphs (Figure 1) of the cost versus volume curves for global foreign exchange, global money markets, european processed equities and european processed bonds shows that from 2000 to 2002, volumes have increased markedly while operations costs per transaction are falling.

The graphs in Figure 1 capture operations costs, i.e. trade capture, static data, pre-settlement, settlement, exception management, projects, management and administration. They do not include middle office or product control costs or IT costs (though separate analyses are available). In three of the four markets, global money markets, european equities and european bonds, "average" bank volumes in 2002 were volumes that only the largest processors handled in 2000. Each graph clearly shows significant cost decreases and a race to economies of scale.

Some of this per trade cost reduction is due to increased volumes being handled at decreasing marginal cost, largely through automation. For instance, the largest equity traders handled around 10 million trades per annum in 1999, now nearer 25 million; for bonds 250,000 trades per annum was large in 1999, now larger operations process over seven times as much at 1.8 million; for FX in 2000, 3 million trades was large, now an investment bank would need around 5 million to be in the top league. With the "per trade" figure as the denominator, volume matters in getting cost/trade down. The pressure increases for those unable to get to efficient levels of capacity or unable to scale the costs of processes in line with demand. However, larger volumes, poorly processed could well increase costs and investment banking operations are increasingly more professional, increasingly focused on reducing exception, improving controls and risk management. 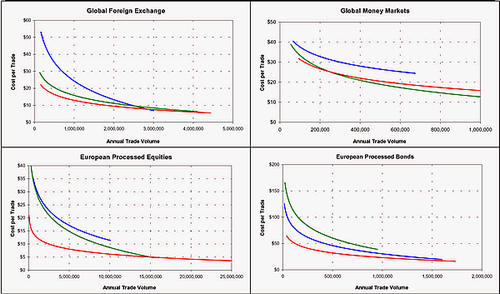 "It's getting to be more like running the space program, much more attention to zero risk" (Global COO, large investment bank).

Cost reduction affects all areas, i.e. operations, operations IT, middle office/product control and middle office IT. Focusing in just of FX, it can be seen that cost per trade was just over $11 in 2000, now under $8. The cost squeeze has been felt in all cost components, as the extract from the FX data shows (see Figure 2). 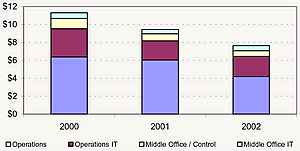 Averages can conceal more than they reveal. The following extract from the FX data shows that there is a wide disparity in approach despite the increasing pressures to reduce cost. Interestingly, there appears to be scope for innovation as low-cost producers seem to be pursuing different spend strategies successfully. Moreover, there is a four-fold, unsustainable difference between the lowest cost producer and the highest cost producer (Figure 3). 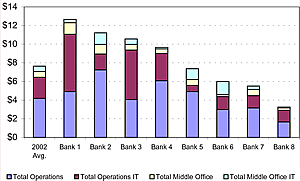 Pundits have long forecast the need for investment banking operations and IT to improve their performance markedly. As cost per trade falls precipitously, one obvious question arises, "how far can this go?". Some operations seem to be able to handle increasing volumes with little additional headcount, hitting 55,000 trades per head. Other operations can have as few as 12,500 trades per head. Investments in IT seem to pay off in numbers of trades per operations head, concentrated in the 2001 to 2002 period. More returns on IT seem likely to arrive. Figure 4, albeit based on sparse FX data, suggests that things might just be taking off.

Cost per trade (i.e. competitive trade, ignoring external costs) may be getting close to ZMCC for commodity-like products in equities, bonds and FX. At ZMCC the highlander effect takes hold, "there can be only one" (from the 1986 film of that name) – a single investment bank could process all the business it wants at almost any non-zero price. The closer to ZMCC, the more intense the pressure for consolidation. While one can reduce cost by decreasing levels of service, it is not paradoxical that higher-volume, efficient providers tend to score well on customer service. The pressure to perform improves the sausage machine and reduces defects, which attracts customers, which generates revenue to further improve the sausage machine. 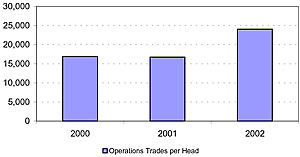 The implications are clear. There is likely to be a shakeout among high cost providers. High cost might well become anything more ZMCC. While cost saving measures such as offshoring or outsourcing will be important, IT excellence is crucial for continued marginal cost reduction. Among the obvious implications for operations managers are the need to embrace:

Against all of this, global operations and IT management need a clear performance framework. Based on interviews with over 25 leading players, the framework (Table I) probably sets the competitive agenda for the next few years.

BTO – beyond the obvious

Too many investment banks seem to pursue similar strategies. Reduce cost, seek volume. Most of the industry leaders grew up in the industry and have shuffled around so much that the gene pool for ideas is interbred. Leading players are looking to other industries for ideas. Some have already tapped into the "machine" paradigm of "measure, control, improve". Six sigma or total quality management, "people, processes, resultsquality", programs were adopted by some of the leaders a few years ago.

However, in an era of ZMCC, technological excellence in innovation, design and delivery becomes even more of a differentiator. The big issues range from highly technical developments in grid computing or risk/reward engines, e.g. PropheZy for predicting and correcting straight-through-processing exceptions, to radical project management techniques seeking step changes in IT productivity or restructuring the sales incentive link to portfolio structures. Innovation from the operations and IT areas "upwards" is happening in areas such as netting, and this innovation must continue.

Organizations must change as well. To paraphrase Chandler (1962), structure follows strategy as surely as strategy follows structure. The organizational model cannot be ignored in the quest for improvement. Some of the leading players are exploring scenarios such as:

ZMCC may well be the most challenging issue facing the investment banking industry. Few other industries face such "weightlessness", i.e. having the potential to hit zero marginal competitive cost levels. At the same time, as the above quote shows, too ruthless cost cutting starts to increase risk. If ZMCC takes hold, it will be a very rough, perhaps fatal, ride for investment banks that are unable to balance cost per trade appropriately against risk.

The author is Executive Chairman of consultants Z/Yen and would like to thank Giles Wright of Z/Yen for providing the background analysis.

Chandler Jr, A.D. (1962), Strategy and Structure: Chapters in the History of the Industrial Enterprise, The MIT Press.