Is there a risk that retail banks, as we know them today, could disappear? It seems unthinkable, but there are huge changes afoot in the retail banking industry and many costs to be shaken out. Pressure on banks to take action is already coming from the capital markets. There will probably be further pressure when the Cruickshank enquiry into competition in the retail banking sector reaches its conclusions.

In order to understand these changes it is helpful to go back to first principles, remind ourselves what services retail banks provide, and ask how else some of those services might be provided.

The development of retail banking

Banks are, first and foremost, places where you put your money for safekeeping. In the American West (as seen in the movies) banks provided strongrooms and armed guards to prevent the gold you had spent months acquiring from being hijacked by outlaws. This was a high-value service, which also incurred high costs. Another important service provided by banks is the settlement of debts. Again this used to be a high-cost activity, involving the movement of gold around the country in stagecoaches with armed guards. These expensive but valuable services were typically provided at no charge to the depositor. In return the banks had free use of the money, and grew rich on their lending activities.

Retail banks make money because they borrow from their depositors more cheaply than they lend to their borrowers. Current accounts are potentially very profitable because the money is borrowed at a zero rate of interest. However, there is also a commitment to provide safe storage and settlement services. One of the reasons why banks prospered over the century up to the Second World War was that, as paper money and entries in bank ledgers increasingly replaced gold, the cost of storing money fell. More importantly, the invention of the telegraph decimated the cost of transmitting money. The depositor, who gave the bank free use of his money, was getting an increasingly poor deal.

Since the Second World War the cost of providing these key banking services has again, with the spread of the computer, shrunk. Money is now stored electronically and transmitted electronically. It has become the norm to pay people by crediting their bank accounts rather than with an envelope full of cash. So the need for a network of branches containing an army of bank clerks to handle these transactions has been greatly reduced.

However, if depositors are now serviced more cheaply, the same is not true of borrowers. The true cost of lending, from a bank's point of view, is the bad debt. Choosing borrowers who can be relied upon to repay is an expensive activity. But it is more expensive to chase those who are reluctant to repay and to write off the debts of those who are unable to repay. Although changes in technology have had some impact on the cost of managing the loan book, there is not the same obvious reduction as on the deposit side.

Technology has therefore had an asymmetrical impact on the banking industry ­ the cost of servicing deposits has fallen much more than the cost of making loans. In a competitive market we would expect to see these benefits passed on. Yet the reality is that there is a great deal of inertia among consumers. Bank charges are still surprisingly high and interest-bearing current accounts still the exception rather than the rule.

There are two reasons for this. The first is that the banks have not shrunk their branch networks sufficiently rapidly to reap the full benefit of the potential reduction in costs. Second, the profits from their deposit-taking activities are being swallowed up by other unprofitable activities.

This leaves an opening for new entrants to the retail banking industry who specialise simply in deposit taking, placing the deposits directly on the wholesale money market. A new entrant following this formula could offer the basic banking services of safe storage and settlement much more cheaply than the existing banks. A large network of branches is no longer necessary to capture the deposits. Salaries can be paid into a bank from anywhere. And you don't need the branches to enable your customers to manage their money. This can be done by post, telephone and increasingly over the Internet.

What you do need, of course, is a name. The customers must be confident that money deposited with Safeplace plc is completely safe. They need to be sure that they can retrieve their money easily and conveniently. Large retailers are able to provide that kind of comfort both because of their name and because of the reassurance provided by their large network of stores. Those stores are already places where customers get cash (using the cashback facility at the tills). It is a natural step to provide other banking services at these locations. 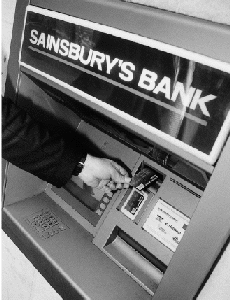 The supermarkets can do for banking services what they have done for a whole range of products under the 'own label' banner: provide the retail outlet and the quality assurance, and let the specialists provide the product. Sainsbury's has shown the way with the Sainsbury's Bank, set up in conjunction with Bank of Scotland.

However, the real money is to be made not by offering the whole range of banking services at a new kind of outlet, but by unbundling the product offered by the banks and giving the depositor a better deal.

Whoever is first to reach the customer with this proposition will make dramatic inroads into the market share of the banks. The conversion of banks into pizza parlours and wine bars is already attracting press attention. It is a visible sign of the upheaval taking place in the sector. The really interesting question is whether certain retail banking services are best provided by banks or by retailers. There will be some big mergers, and some big casualties, before we know the answer.

Bill Robinson is head UK business economist in the Finance Advisory Service at PricewaterhouseCoopers. He is a former special adviser to the Chancellor of the Exchequer.