Suitable for use with the GE Fanuc Series 16i, 18i and 21i CNC connected with PCs via Ethernet, the new Open CNC API Specification version 1 (FOCAS1) interface, will support open CNC applications to run on Ethernet (Plate 6). As such it can be used by machine tool builders and end users wishing to develop their own applications but who, at the same time, wish to benefit from the most up-to-date features offered by computer control specialist GE Fanuc. 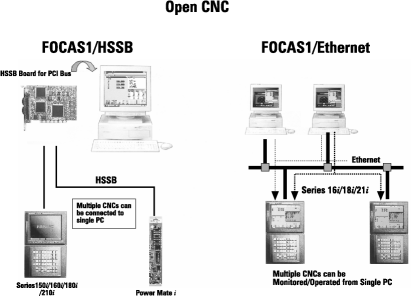 FOCAS1 is said to allow the application of a basic operation package (BOF screen display functions (SDF) and machine status monitoring package). The important aspect of the system, and one which makes it so eminently suited for large-scale manufacturing plants, is that a specified CNC can be operated/monitored from multiple CNCs and multiple CNCs can likewise be monitored/operated from a single PC. This offers considerable flexibility situations where only a few members of staff are employed but are expect to oversee the operation of, for example, a transfer line of considerable length.