At first sight this title may not seem appropriate since the global positioning system (GPS) had been identified in its developing years as the all-powerful answer to navigational and surveillance problems; so why do we need to improve on an already excellent system? The answer has to take into account the needs of a variety of users of civil GPS and the possibilities of lessening of accuracy due to a variety of causes.

The 1990s have been called the decade of GPS and certainly an important stage in its evolution was reached in 1995, when the system achieved full operational capability. The decade also witnessed the deployment of the full complement of 24 satellites. It has become apparent, though, that the "sole source" concept of the civil system could not be realised without some form of augmentation and efforts having been made to develop these in various parts of the world. Techniques have evolved that will, specifically, satisfy the requirements of aerospace. Recently, Europe has also begun to develop its own satellite navigation constellation called Galileo.

ICAO has said that the global navigation satellite system (GNSS) is the concept meeting international requirements for primary stand-alone navigation in the twenty-first century. The basis for GNSS is GPS in co-operation with the Russian GLONASS or other systems being formulated. GPS is a military-based system provided to civil users in a degraded version and over the past few years there has been an increasing input and requirements for many phases of flight have been formulated including precision approaches.

Initial operating capability of GPS for civil use was obtained in 1992 and it was first envisaged as a supplementary navigation system.

The GNSS panel was created by ICAO in 1994 in response to the final report of the FANS committee, which recognised the need to prepare the technical standards for satellite navigation to progress the CNS/ATM concept. This panel was required by ICAO to draft a circular providing guidance on the realisation of early benefits by the use of satellites and also develop standards and recommended practices (SARPS). The feasibility of using satellites for precision approaches was also to be considered. In the following year the ICAO GNSS manual was issued and details of the appropriate standards to be addressed concerning GPS, GLONASS and augmentation systems.

During the late 1990s the chief executive of the UK National Air Traffic Services (NATS) made some highly pertinent comments on the new systems viewed from a UK and European perspective. At the same time, much of what he said could apply to world-wide conditions. He noted that much of the UK's and Europe's congested air traffic system still relies on ground based communications, navigation and surveillance facilities to provide the ATC service. Air traffic across Europe is currently growing at 5 per cent each year and forecasts show sustained growth which will result in a doubling of Europe's air traffic over the next 20 years. New technology in the shape of a mix of ground and satellite based equipment together with enhanced air traffic management systems, in other words CNS/ATM, holds the key to a solution. The three main areas to benefit from such a system are: a global navigation capability which is independent of a ground-based infrastructure; which provides a reliable navigation service in areas where ground based navigation aids are sparse or non-existent; and which also allows aircraft to be equipped with a simpler avionics package and has less need for ground based infrastructure, thereby providing cost savings. Current satellite services do not however provide sufficient accuracy, integrity and availability, so that various augmentation facilities are being actively pursued.

At the same time as these considerations were being aired, it was further realised that GNSS has the potential to be a civilian controlled satellite position location and precise timing system that allows more efficient performance of tasks such as, for example, the consideration of parallel airways, area navigation techniques, and reduced separation criteria. It was also observed that the GPS and GLONASS systems are more than 20 years old, with the initial system requirements being driven by military considerations. For full implementation of civil GNSS, some alternative concepts for constellations and techniques may be considered.

Since these comments were made developments have taken place in various parts of the world leading towards an eventual seamless, satellite navigation capability. One of two US systems, the wide area augmentation system (WAAS), designed to support GPS, will be commissioned later this year and will eventually have very wide applications as the accuracy which it will provide will enable a residual error of only a few metres to be achieved. This will improve on the present digital GPS. The other system, the local area augmentation system (LAAS), is still under development and is scheduled to appear in 2001. Other systems of this kind include the Japanese multifunctional transport satellite based satellite augmentation service (MSAS) also being developed.

Perhaps of most interest in Europe is European geostationary navigation overlay system (EGNOS) which is a project initiated by The European Commission, Eurocontrol and the European Space Agency (Figure 1). The objective of EGNOS is to provide a full satellite navigation broadcast service to augment GPS and GLONASS and enable the GNSS to satisfy all navigation performance requirements as specified for en route through to Cat 1 precision approach. 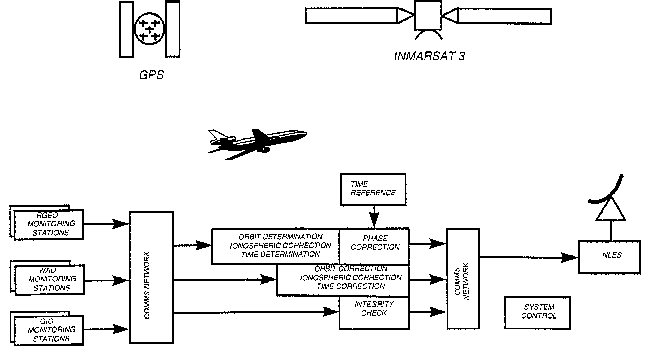 The development and deployment of the system have been planned as a five-step strategy in two phases, each step delivering an extended level of service.

The advanced operational capability (AOC) phase comprises steps 1 to 3 and is scheduled for completion at around 2002 at which time the full EGNOS functionality should be available to augment GPS and GLONASS.

Steps 1 to 3 will provide the following service levels. Service level 1 will be an initial system operation providing GPS-like pseudo-range signals to augment the existing GPS constellation. The availability of ranging from two geostationary satellites will improve both overall GPS availability and the performance of receiver autonomous integrity monitoring (RAIM). Service level 2 includes the provision of a ground-derived integrity channel to augment both GPS and GLONASS services. The availability of an independent, ground-based integrity service would overcome principal shortcomings and concerns associated with GPS and GLONASS and might be the most important function offered by EGNOS. Service level 3 covers the provision of a wide area differential correction service to augment GPS and GLONASS and increase accuracy performance, in particular the vertical accuracy needed to support non-precision and precision approach operations. It is currently planned that this step would be essentially time coincident with the previous step. It is not planned that the ground and space segment architectures will be fully developed until steps 4 and 5 have been completed at full operational capability.

Service levels 4 and 5 will feature improved ground and space segment performance, particularly availability, continuity and service coverage. These levels 4 and 5 provide essentially the same functionality as level 2 and 3 respectively, but improve EGNOS performance through the addition of two further geostationary satellites and an extension of the number of ground monitoring stations and where required, an increase in the level of redundancy in order to satisfy the requirements for continuity. These developments should satisfy the EGNOS mission objectives and enable GPS and GLONASS to be suitable as an aviation navigation system. At the time (1997) it was estimated that both phases could be completed by 2005.

Since these comments were made, the DERA BAC 1-11 aircraft has been undertaking trials as the EGNOS system testbed, beginning these in 1998. Additional ground equipment will be installed in Europe during this year. It was remarked a few years ago that in the core area of Europe, economy is perceived to be the most important benefit from GNSS, and one that will be dependent on the eventual withdrawal of present ground based navigation aids. Outside the core area, where there is a dearth of navigational aids, more immediate and worthwhile operational benefits are expected from improved utilisation of the airspace. Additional navigation payloads on geostationary satellites and suitable monitoring stations could also be used to extend EGNOS coverage beyond ECAC into adjoining regions, Africa, India, etc. Europe has the opportunity to take a leading role in promoting safe GNSS operations in these regions.

Following on a communication earlier in that year, the Council of the European Union adopted a resolution in July 1999 that Europe should become involved in a new generation of satellite navigation services. It would be a global system, compatible and interoperable with GPS. Galileo is being developer so that eventually Europe will not be so dependent on GPS which is military-based. The availability of another, civil, system such as Galileo will reduce the possible instances of restrictions in the future as well as other possible advantages.

The definition phase of Galileo should be completed by the end of this year and will address a wide variety of organisational, financial and technical issues. The system would operate medium earth orbit and geostationary satellites and involve many companies in an international effort. The full system is projected to become operational in 2008. This year further steps will be taken to bring Galileo "on stream" in the early part of the decade with further details emerging of how the system will match and enhance the GPS capabilities already existing.