The following paper describes the functions, and objectives, in using a single seat, motion and visual equipped, flight simulator to illustrate aerodynamics and flight mechanics principles.

Since the paper was submitted the simulation potential has expanded with other universities identifying additional features specific to their specific courses, which have been built into the delivered simulators.

The engineering flight simulator has a place in providing the vital link between theory and actuality which is imperative in the increasingly complex environment that students find when they meet industry, either as employee or researcher.

The benefits that an engineering flight simulator can bring can increase with every establishment that realises its potential and applies it, as a useful tool, within their environment and to achieve their specific objectives.

The following paper is presented with the kind permission of Professor G.T.S. Done

Abstract. The paper describes a simulator designed specifically to provide insight and understanding of important aspects of flight mechanics, such as aircraft performance and control, and static and dynamic stability. It thus provides a valuable adjunct to an undergraduate course in flight mechanics, and can complement and develop lessons learned in flight tests. An introductory background is presented, which establishes the basic need. A description of the simulator follows covering, first, the generic aircraft model software and, second, the hardware, i.e. the capsule, controls and motion system. Typical student exercises are described followed by brief conclusions.

Successful aircraft design relies on an understanding and knowledge of many aspects of aeronautics, a key area being that of flight mechanics. This covers many aspects of aircraft performance, control, and behaviour in flight, which is usually defined in terms of static and dynamic stability. A typical undergraduate course in flight mechanics supported by standard textbooks such as Etkin and Reid (1996) and Russell (1996) provides the theoretical background to the understanding of these elements. However, some of these topics are quite difficult to comprehend and are mathematically involved, and many courses provide practical back-up in the form of specially designed model tests in a wind-tunnel, and flight tests in which the students are carried as observers.

Such flight tests are provided, for example, by the College of Aeronautics for UK students, using a Jetstream 100 aircraft seating ten student-observers. At first sight, this appears to be a relatively expensive exercise compared to what could be performed in a wind-tunnel laboratory; but, in fact, the impact on a student of personally experiencing, for example, a Dutch roll dynamic stability mode is considerable. A valuable and lasting impression is gained in a very short time which aids the understanding of the mathematics behind this particular motion. The flight test aircraft carries observer display panels and data recording apparatus so that plots of the motion parameters and other relevant data can be studied later at leisure on the ground.

The flight tests normally include demonstrations of all the rigid body modes and measurements of the stick-free and fixed longitudinal static and manoeuvre margins. Additionally, performance measurements can be made in climb and descent and with one engine out, for example.

There are, however, limitations to the scope of the flight tests, partly because of the expense and partly because of impracticability. The flight test experience of aircraft rigid body modes is valuable, but the aircraft is not equipped to demonstrate the effect of various design changes on static or dynamic stability. It would also be dangerous, though not impossible, having mobile students aboard, to demonstrate in flight the effect on stability of having a cg that is positioned too far aft. Additionally, since it is impractical for students personally to take over control of the aircraft, there is no immediate way that the effect of the above on handling properties can be readily transmitted.

The use of a flight simulator appears to address the deficiencies of the flight tests mentioned above. However, when the teaching needs are clearly identified then it is found that most currently available training flight simulators are unsuited to the task. A large moving base simulator would be generally too expensive for the average-sized university department to buy, install and maintain and, besides, it would be particularly unsuited to the requirement of handling design parameter changes for the demonstration of effects on stability. This also rules out hiring time on such a machine. A typical fixed base unit tends to be geared to instrument procedures training and, although cheaper, is also unsuitable.

It was therefore decided, in late 1993, to draft a set of requirements for a flight mechanics teaching simulator that would suit the needs of the Department of Mechanical Engineering and Aeronautics at City University and use these as a basis for approaching suitable providers with a view to procurement. This resulted in the University acquiring a purpose-built flight mechanics teaching simulator (MP520-T) from Merlin Products Ltd (a UK firm), which is now described (Plate 1). 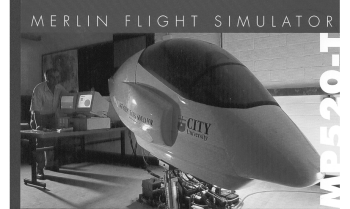 The aircraft model used by the simulator is generic in that it is not intended that it should represent a particular aircraft, and in that it is capable of being altered in the manner described below. It is, however, necessary to use some sort of basic model from which to make the desired parameter changes, and that used in the student exercises described in this paper represents a business jet of approximately 7,000kg AUW powered by two rear fuselage mounted turbojets.

Simulated flight can be initiated in air or at take-off as selected from the "window". Model parameters, such as weight, inertias, engine and landing gear positions, engine thrust at idle and maximum, control surface areas and maximum control torques, tail arm, dihedral, etc. can be changed via selections made on other windows. The wind velocity and direction at ground level and a specified altitude (linear interpolation in between) can also be defined as can the brightness (day to night) of the visual scene and visibility (misty to clear horizon) (Figure 1). 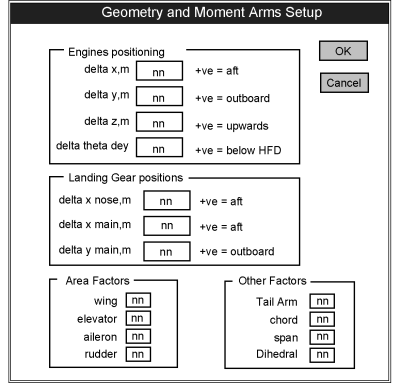 The simulator configuration has been influenced to a large extent by overall cost, thus leading to a single seat capsule on a two degree of freedom moving base (pitch and roll). The motion actuators are pneumatic for safety, environmental and economic reasons; the relatively low rigid body natural frequencies imply that the higher frequency motions (i.e. jerky or jolting motions) cannot be simulated, but this is not important in view of the student exercises undertaken in support of flight mechanics teaching.

The outside visual scene is provided by a computer generated realtime software program which includes texture. That used at present by the City simulator is at the lowest level which provides a full and realistic texturing of the airfield runways and a reduced level elsewhere. The visual scene and other software is run on two PCs, the instructor station having two monitors, one for the visual scene as seen by the student, and the other for setting up the model.

Most students are not pilots and therefore cannot easily assimilate all the information provided on a conventional instrument panel; therefore, only that considered necessary for carrying out typical flight mechanics exercises (described in the following section) is presented on the head-up display (Figure 2). 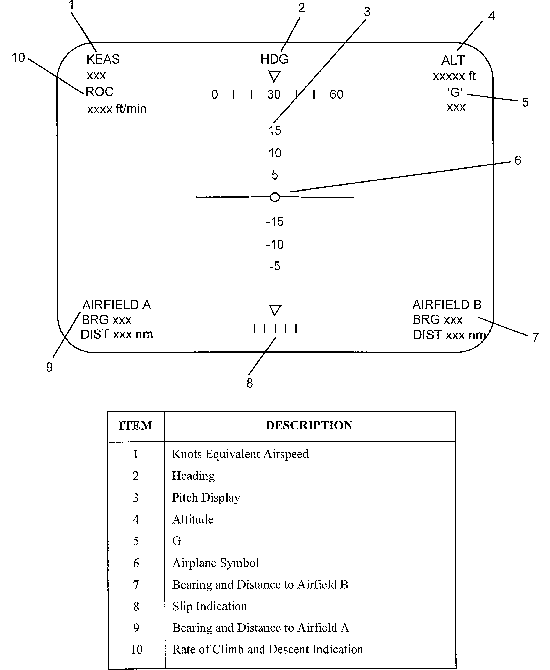 In preparation, each student receives a briefing sheet on the simulator and a set of exercises. Several staff are trained as "instructors" and the students book an exercise on a schedule of "slots".

The exercises at City University are aimed at second- and third-year Aeronautical Engineering BEng students and comprise the following elements.

In the latter, printouts are made of the results for calculation and comparison purposes. A total of 24 (user selectable) parameters (displacements, velocities, accelerations and forces/moments) are available (Figure 3). 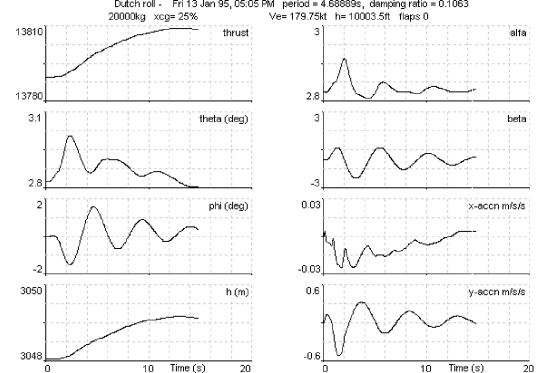 Intensive use since October 1996 has shown that the flight mechanics teaching simulator provides a valuable adjunct to the undergraduate flight mechanics course, and reinforces and complements the flight tests undertaken by students. It provides direct hands-on experience to the students of the fundamental principles of flight, and also of the effects of design and other changes on static and dynamic stability and on handling characteristics. These learning experiences are also valued by some of the academic staff members who teach on the aeronautical courses and who have become engaged as instructors. It provides considerable added interest to what is normally a rather mathematically biased course, and attracts many students who wish to use it outside the timetabled hours.