A conference was organised by the Royal Aeronautical Society in co-operation with the Institution of Mechanical Engineers and the Institute of Materials to explore the future prospects for these materials. It attracted a variety of informative contributions indicating perhaps the direction in which the industry is proceeding.

A perspective on advances in aerospace materials and structures was provided by DERA Farnborough with the requirements of increased affordability; improved availability, safety and survivability; and improved performance. For the first, the initial cost of military systems is becoming prohibitive. The requirements are of course related to both composites and metallics. Improved performance means increased affordability. For metals, improved alloys, welded unitised structure, dissimilar metal welding, explosive joining, integral skin stringers, creep forming and taper rolling all contribute to affordability, as well as improved fabrication. Incremental improvements have been made to UK aluminium-lithium alloys and new alloys have appeared with exceptional properties. For future engines, improved nickel alloys are noteworthy, as well as Ti and A1 MMCs, intermetallic alloys, engineering ceramics, and CHCs. Improved corrosion resistance of airframes includes restricted use of chromium salts and protections that must last for 30 or more years of service life.

A direct effect on the affordability of polymer composites is the optimisation of low cost routes for fabrication, joining and assembly which can be approached by infusible, injectable resins with high toughness; RTH and other processes; more extensive use of non-crimp fabrics; manufacture of novel materials, e.g. space fabrics, non-crimp fabrics and improved mechanical properties, e.g. by improved fibre placement (Figure 1). 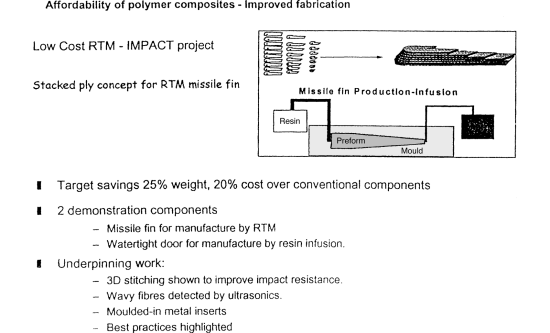 Improved performance for polymer composites can be obtained by tackling key properties so that design stresses are increased. Better materials can be obtained by interleaving, surface inspection, through surface pinning to reduce delamination, and higher temperature resistance. A better understanding of failure mechanisms would be helpful, particularly complex loading modes and associated phenomena and the need to predict damage growth for fatigue life prediction.

From BAe Systems came a paper on material selection for commercial success. A brief history of wings in the Airbus family is included up to A3XX (Figure 2), and development trends for the future. Airbus Industrie are developing advances in a wide range of technologies to reduce operating costs and justify the high development costs of new aircraft. Contributions to the life cycle costs are widely based. First cost, fuel burn and maintenance cost are affected by the wing structure. Minimising the structural weight of the wing is essential. Designers must take into account material characteristics and manufacturing processes. This is generally well recognised for composites and is still true for metallic structures as well, especially as the range of materials, semi-products and processes is being extended.

Today most composite applications are thin section rather than thick, other than at attachment points and major joints. Scale effects allow the composite to perform well compared to metallic structure. The disadvantage of composites for sandwich structures is their susceptibility to impact damage. This is somewhat offset by improved corrosion resistance in the composite. Composite does not perform well compared to metal in complex stress fields at high load inputs, but performs best where specific modulus is the main driver.

The family of Airbus aircraft began with the launch of the A300 in 1969. Significant improvements have been made over the years in materials and manufacturing processes while retaining many of the structural design principles employed. For example, the wing chordwise joint outboard of the engine on the A310 was deleted when introducing the 7150 alloy and, similarly, the chordwise joint on the A340-200 has been deleted for the developed A340-600. These major joints are a significant cost and weight penalty. In the A310-300 the use of composites made an important step forward, with the fin, control surfaces and fairings. On the A320, in addition to fairings and control surfaces, composites are used on the fin, horizontal tail and flaps. A total of 800kg is saved per aircraft, which is over 1 per cent of the maximum take-off weight.

On the A330/340 improved alloys and reduced variability in thick plate up to 200mm has enabled the introduction of processes such as the cold working of fastener holes allowing significant increases in the allowable stress levels in the lower wing panels. The introduction of aluminium-lithium was a feature in this aircraft but the cost/weight was not adequate although weight benefits were obtained. On the A340-500/600 a new composite application is a glass fibre-thermoplastic leading edge, initially saving 30kg but increasing to 150kg for the whole wing when additional manufacturing capability is available.

There has thus been a consistent trend to improve structural efficiency. Large applications produce greater efficiencies. To achieve the target improvements required for the A3XX, however, further innovations in design, certification, materials and manufacturing processes are being pursued. Targets for future development include, for metallics, improved metal utilisation; assembly tolerance management; design for assembly; and improved properties. Those for composite include raw material cost; reduced variability and environmental factors; improved structural design; process modelling; control of tolerances for assembly; and reliable adhesive bonding.

Also from BAe Systems, this contribution focused on the military aircraft aspect. The Harrier II is the first production combat aircraft to make extensive use of composite materials. The graphite epoxy composite structure saves 480lb (218kg).

How to select the "best" option may depend on the dominant design criterion, although there are usually many potential options. The cost/mass trade-off must be established. A quality function deployment analysis process is essential; identifying the options and the design drivers. A QFD procedure is also laid down. Various options have to be considered and final weighted results established.

Examples of where the use of simple criteria for selection resulted in non-optimum design solutions include the BMI Harrier flap, EFA pressure bulkhead, and EFA foreplane.

Existing composite applications include improved damage tolerance and lower cost, and future directions could include fibre placement, more highly loaded internal structure, and the qualification costs of new processes. For metallics, the way forward could include the development of current materials/processes, both hard metal/titanium and aluminium.

Problems and solutions for composite structures

From Imperial College was a study of composite advantage over metals together with affordability aspects. Its advantage is in specific stiffness (aeroelastic and buckling) and in fatigue-critical areas. Damage tolerance is worse and may be invisible. Delamination or debonding may be caused in laminated composites. (As far as affordability is concerned, it is notable that metal manufacturing costs have decreased by 30 per cent in six years.) The following trends in manufacture of composites are expected: unitisation, less autoclaving, more automation, and a synthetic environment.

In virtual manufacturing, analytical simulation is becoming much more reliable; in the case of metals, forming, forging, casting, etc; and for composites, for draping RTM flow and conduit design, etc. Confidence has to be established, particularly with fatigue in metals; with composites, is local 3D analysis necessary and is it in the right place? An example of composites vulnerability is in low velocity impact damage. For damage extent, single equivalent delamination is predictable for impact sites away from stiffeners, supports, etc, but impact over a support is quite different.

At 3D stress concentrations, composites are brittle, and cracks or delaminations may propagate in unstable fashion. Therefore, fine finite element detail may be necessary. The general 3D problem is still complex for a design tool. In short, FEA as a design tool for strength and failure needs a culture change. This issue is being addressed in new design and analysis of composite structures. Failure prediction is usually non-linear but any strategy which is deemed too computationally expensive in 2000 will be in common usage by 2005 (if user-friendly).

The EH101 ACSR strut (Figure 3) is an active system; its response differs with flight conditions. These struts contain actuators and replace the main rotor gearbox support struts. The strut stiffness is critical to system performance. The materials chosen reflect these conditions, as shown in the illustration; a composite tube, TA 11 titanium end fitting and corrosion resisting steel lower strut, with the ACSR actuator within the tube. 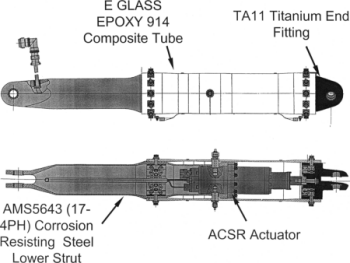 The Lynx main rotor head is of titanium 10-2-3. Strength and stiffness are critical; there are no flap or lag hinges. It is highly stressed with monolithic compact sections. A safe life design is essential; it is not damage tolerant and is a Grade A-VITAL part. The Lynx main rotor spider arms are of S99, allowing the following conditions to be satisfied. It is highly stressed with compact sections and integral splines and thread. As a vital part, its integrity depends on pre-load being maintained. It is a safe life design, not damage tolerant; therefore shot peened, S99 high strength steel was selected.

For main rotor blades, the major design aspects to be addressed include the root end attachments; tip mass balance weights; spar strength and structural stability; and erosion shields and heater mat requirements. There were considerations against metals and main rotor blades are of composite construction. The root end lugs have woven glass surface layers and Rohacell foam filler with steel bushes. The side wall and rear wall are carbon. The main spar of the main rotor blade is of composite construction with a titanium erosion shield.

These activities were reviewed with the accents on metallics and composite technologies and developing structural features. Bombardier is well-known for its regional and business aircraft characterised by significant new derivatives of existing designs and completely new and advanced concepts. The latter include the CRJ700 (70 seat) and the BRJ-X/CRJ900 as well as the BD100 continental. Activities at Belfast currently include the global express horizontal stabiliser, Regional Jet nacelle, CRJ200 fuselage, CRJ700 fuselage, V2500 A5 nacelle, as well as work for Boeing on the 737-700.

Today's technologies for metallics have developed over the last three decades; in particular, redux bonding has been competitive for some time, e.g. F28 and f100 multiple laminates. Currently, skins are chemietched; there is considerable use of machining from bar and plate and a wide range of extruded sections. Riveting is a main joining process. Material selections include 2024 T3 for skins except where the need for superior fatigue and toughness justifies the use of others, e.g. 2524 T3. Other examples include 7075 T73511 or T76511 extrusions except where better fatigue is required (e.g. 2024 T3511/T8511 extrusions for fuselage crown stringers).

Composite technologies include prepreg fabrics (woven) and tapes (UD). First generation materials are used except where there is need for high performance which justifies the use of intermediate modulus fibres and toughened resin. There is also extensive use of honeycomb stiffening, automatic control of ply cutters, laser marking, and some use of integrally stiffened skins, manufactured using matched tooling. Advanced processes also featured include digital preassembly, large FE models, and computational fluid mechanics.

Considering metallics versus composites, a 15 per cent weight saving for the latter is a reasonably dependable figure. The cost is variable, depending on many factors. For future metals technology, fibre/metal laminates will probably be used for fuselage skins, and welded fuselage components and extrusions of stiffened skins. For composites, RTM, RTI, and RFI will be applied to dry preforms on simple structures being developed. Complex structures are also being produced, for example, a single-piece control surface with one skin, spar and ribs, lacking only the closing skin to be applied.

The CRJ200 aileron is to be made by RTM with multiple spars, which will be tested this year. Anticipated savings are 20 per cent cost and 20 per cent weight. 3-D preform will also be used, which process has been delayed but is now the subject of renewed interest. It is considered that sizeable savings could be made in composites by discussion and consensus within industry on what certification really is necessary, as well as "safe" levels of design stresses, and also standardisation for repair materials.