Graphicraft informs us that it took them just ten hours to transform a brand-new British Midland Airbus A321 into the full livery of the Star Alliance group of airlines (Plate 3). 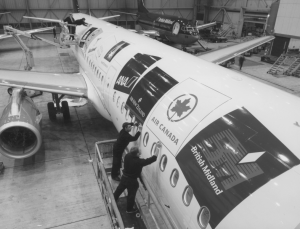 Plate 3 Quick change artists: Graphicraft technicians apply logos from the 13 members of the Star Alliance group of airlines to a British Midland Airbus

With just a single overnight maintenance stop available, the logos of the 13 member airlines were applied to both sides of the fuselage by a team of four.

Star Alliance is a worldwide network of airlines whose partnership is designed to provide air passengers with the benefits of global reach and seamless travel. British Midland will become a full member later this year.

"Speed was of the essence", says Martin Widman, planning and production control manager of British Midland Engineering. "Painting such a large number of intricate logos could take up to three days and, although the cost would have been similar, the extra downtime would have been unacceptable to the airline. Graphicraft manufactured the decals in perforated aircraft film and applied them within a very tight time scale keeping the downtime to the absolute minimum. The Airbus looked superb in its new livery when it flew out of Heathrow the next day."

Graphicraft is to livery a further three planes in Star Alliance colours for British Midland. Similar work has also been carried out for Star Alliance member Austrian Airlines and its subsidiary Tyrolean Airways.