Model aircraft enthusiasts are not the most forgiving of customers when it comes to parting with their hard-earned cash for the best aero-engines that money can buy. Having devoted hundreds of hours attempting to secure near perfection in detail of their flying machines they look to their engine supplier to come up with the best possible power unit to match. At prices of up to £600 or more model engineers look for something that will combine reliable power output with the smallest possible frontal area so that it will not spoil the all-important visual appearance of the model. For the past 15 years this is exactly what Geoff Gross and his co-directors at AGC have been providing, with their "Laser" line of four-stroke model aircraft engines.

As an ex-aeronautical engineer himself, Geoff has been in no way ready to compromise when it comes to applying modern technology to the production process and says that, even the prototype Laser unit was produced on a Bridgeport ­ admittedly a manual machine ­ but the company's first "proper" NC machine tool was an old Interact. This was closely followed by the purchase of a Bridgeport Interact 520 vertical machining centre, then a VMC 560 and, more recently, the Int 520 was sold-on to make room for the best buy so far, the Bridgeport APC 600 with Auto Pallet Changer (Plate 1). Where once the company generally offered to send engines out within 28 days from receipt of order, or up to eight weeks for certain larger models, it is now happy to oblige with a seven-day turn-round offer.

Most components machined on the Bridgeports are made from solid aluminium alloy and these include: crankcases, cylinder heads, bearing housings, conrods (milled from HE15 on the 600) and backplates, but there are also a number of steel items, such as rockers, pinion drives, camshafts and crankshafts machined from EN36B. 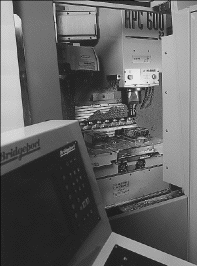 The high carbon steel needed to provide the toughness essential to these key components is not the easiest of materials to machine, as Mr Gross is the first to concede, but he says that the Bridgeports cope with it very well indeed.

Clearly, with so many components and variations needed to cover the whole engine range rapid change-over times are essential. With typical batch sizes of around 300 units now scheduled through the machines, and with more than ten minutes previously being lost for re-loading each 45 to 60 minutes of running time, the ability to switch from one pallet load to another in seconds has made the new APC the fastest machine available. Not only that but it came at a better price than other equipment on offer and had a control system totally compatible with existing programs in use.

With a range of five single-cylinder and four vee-twin models offering power outputs in the one to 4.5bhp range, the lightweight, precision built, units claim to be perfectly engineered to meet the needs of even the most serious modeller. Designed to operate in the 7,000 to 11,000rpm speed bracket, noise reduction has been an important aspect of Laser engine development and all engines are fitted with a "Quiet" silencer to help hold noise levels down to the 82dba at 7 metres threshold expected nowadays.

This product achieved success at the World Scale Championships in Perigueux, France, 1997, where Max Merckenschlanger of Germany took first place with his Laser-powered Albatross DVa and Jan Hermkens of The Netherlands used four Laser-70 engines to power his B17 Flying Fortress into first place in the Europa Star Competition.

Another important aspect of the machining operations, as related to the Laser engine, is the need for total accuracy so that there are never any assembly problems. Assembly is necessarily labour-intensive and so it is essential that all components be completely interchangeable, something which the easy call-up of previously stored programs on the Bridgeports claim to provide as a matter of course.