BP has extended its contract with Aberdeen-based iicorr to work on its largest worldwide development project. The Caspian Sea contract is worth over $4 million per year and will result in iicorr continuing to service BP's largest oil and gas development project. The extension results in iicorr recruiting up to 40 staff to work alongside existing teams in Aberdeen and Baku.

Providing an inspection and integrity service on all BP Caspian Sea facilities and pipelines, iicorr will be developing management systems and risk-based strategies as well as implementing inspection. The pipeline runs from Azerbaijan, through Georgia and on to the Mediterranean offloading facility in Turkey. Estimates on the oil reserves in the Caspian Sea range between 17 and 33 billion which stand against 29 billion barrels proven in the US and 15 billion barrels in the North Sea.

George Watson, Managing Director, said: “We are delighted that BP has extended this contract with iicorr – it represents a large amount of trust in our services due to the importance and significance of the project. We are a relatively new company in the integrity services market but what BP finds appealing is our unique ability of being able to develop systems and challenge practices in a relatively short period of time. It is incredibly rewarding to be working on such a huge project with BP and the fact that we will be employing up to forty new employees is a great bonus to iicorr”.

Peter Falconer, Contract Manager, added: “BP are keen that the team is not constrained by custom and practice in other parts of the world and to develop what can be considered as best practice for assets across the Caspian Sea. iicorr has shown it has met this challenge and have already put in place methodologies for the risk based inspection processes and are engaged in developing management systems which will control integrity activities across the Caspian Sea. We are confident that BP's tight deadlines will be met, with quality deliverables that will effectively manage risk when the facilities go into operation. This will also ensure ongoing availability of plant and equipment along with asset value without compromising the safety of personnel” (Plate 3). 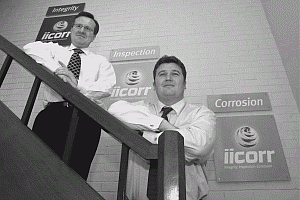